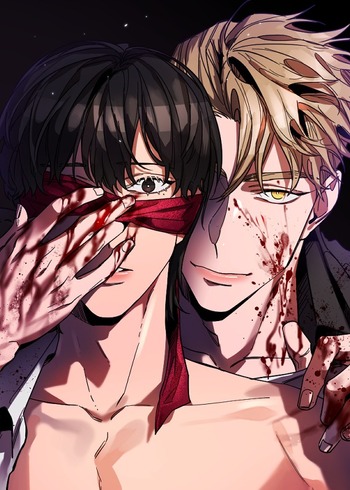 Where do I start! This manga is so interesting and unique i HIGHLY reccommend, kinda got killiing staking vibes even though the story is very different, theres some tense moments that really have you on the edge of your seat!! from the beginning I was hooked. NEED MORE CHAPTERS .

Well equally as bad as Killing Stalking and a pretty addictive read too! The seme is like a “Jack The Ripper” type who kills prostitutes and anything he finds on his path, he’s basically a psycho who is above the law. The uke is a prostitute who pretends to be blind and is just letting the seme do whatever he wants to do with him. Yeah the uke is claiming he’s gonna call the police every time the seme kills a guy but actually doesn’t because he doesn’t wanna get killed himself and he is blinded love (no pun intended) by the seme. Yeah if you like your horror yandere type of Yaoi, then step inside this extremely disturbing and thrilling Lezhin manhwa.

Be warned, there’s corpses, blood, gore in this so if it’s not for you, avoid it at all costs for your own health and well-being..

The story keeps your attention and the art is great. There are quite a few characters right off the bat, though, which can be a little hard to keep track of. Overall, a good read if you're looking for something disturbing and thrilling.

It's interesting but on the other hand, it's not. The art is gorgeous...you just want to stare at it all day long, but the story itself...you gotta read it to know what I mean.

It's kinda similar to Killing Stalking, Pawn's revenge but at the same time, it's not. An orphan (who is in his mid-20s already) pretends to be blind in order to serve as a gay masseur to a wide range of people. I suppose it's illegal in Korea...so he was breaking the law. Then...we are having a handsome murderer. The first time they meet they have sex next to the dead body...what a turn-on! Spoiler. (There is no mystery or destiny...the murderer knows the other guy from the very beginning...he basically dragged him into this whole mess. Their relationship develops solely on sex and some sort of feelings, surprisingly,  with no punching or torturing.)

What did make me keep on reading? It's sex scenes. No...not what you just thought. I didn't pay attention to the blind guy but the blond was very sensual... you never see tops enjoy it as if they are innocent maidens. It made me wanna read more...what else is there except for a blood-thirsty weirdo? I am on chapter 58 and I don't know if what they have is love..it's not Stockholm syndrome either. The bottom is a filthy prostitute( that's what he thinks), and even police looks down on people like him...which is very gross...but...if the blond sees the guy as some sort of sacred thing the other sees him as filth matching his lowly self.

I dunno....I might pick it up when it's over...it's definitely not something I would wait every week for, but I am curious how it's gonna end.

This manhwa is so fuckin amazing I can't get enough of it! The thrill I feel every time I read it is on a totally different level!! I can't believe I fell for the psycho killer, but considering the other people around are more of a trash than the psycho killer THAT'S ABSOLUTELY UNDERSTANDABLE!!!! I totally recommend this if your looking for extra thrill while enjoying ur yaoi!