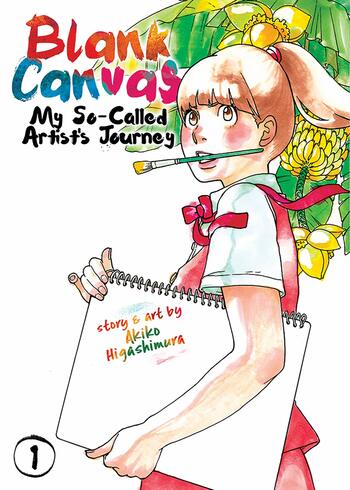 I met the artwork of Higashimura sensei by the saga of Jellyfish Princesses.
I was a bit cautios, isn't this my favorite manga genre, but I was definitely conquered by the lively character of Tsukimi and Kuranosuke. I devoured it all and read also some other one-shots form sensei. At the end I came to this self-biography.

The style isn't boring at all, the trait is the trademark of Akiko Higashimura. You can find wonderful portraits and close-up and rough but lively comic sketches.

The story is about the author's life since the last year of high school to the moving in Tokyo, after her master death, with an already running mangaka career.
The striking difference with other Higashimura's works is the deep sincerity whit whom she talk about herself. It is the first time I know so much about a mangaka private life and believe me, you can't feign indifference.

I'm the father of a teenager, so looking at all those dead ends that Akiko runs into is hurting. The lost chances and the excesses that she plainly tells let me become angry sometimes, other times I got a strong motion for her future.
In a nutshell, Hishigamura's story is the tale of a girl who doesn't really know what she wants, what she dislikes. She just know what she would like to be able to do, but doesn't know how to reach there. In the middle of this difficult trip she meet by chance her real master. He's a man totally devoted to painting arts. The master will forgive all of her bad turns but will never let her forget the great value of drawing, even when she herself would like to forget it.

As a father, while reading, i'd have like to get back Akiko from her mistakes and yell at her. The author herself often appear in the story to remark her own mistakes in a funny way. The young myself, who shares some traits with Akiko, understands her doubts a bit and often raxct to her choices too.

The story final is really intense. Sensei Higashimura recollects the treasure of her master's teaching in heartful and a bit sad way.
I suggest this work to everybody who cares for growing up, any age is fine, try it if you can.

As a bonus, in the back you can find original photos from the time told, a grat addition to feeling.

The prizes it won are really well earned, a great work sensei.