BLAME! Academy and So On - Recommendations

Alt title: Blame Gakuen! And So On 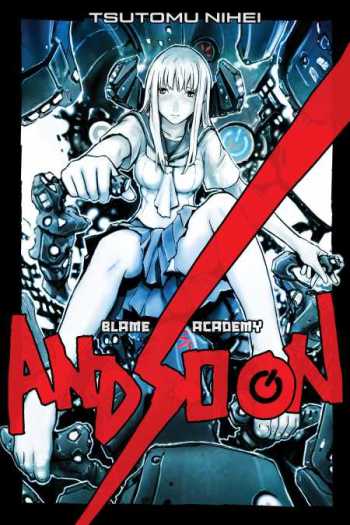 If you're looking for manga similar to BLAME! Academy and So On, you might like these titles.

This story takes place on the frigid, massive artificial planet known as Aposimz. Eo, Biko and Etherow, residents of the White Diamond Beam, are in the middle of combat training when suddenly a girl appears, Rebedoan Empire soldiers in hot pursuit. The girl asks for their help in keeping safe a “code” and seven mysterious “bullets.” This chance encounter marks a major shift in the fate of the entire planet...

A collection of short stories that look to mankind's exploration of space, and examine the possibilities that we could face when we decide to take those first fateful steps into the unknown.

In a dark, dystopic future, the Church of Transfiguration was formed; their charter was to promote extreme cybernetic enhancements. However, mankind also perfected the art of immortality through genetic manipulation, and then the great ruin came. Now, the Church sends its Inquisition to track down these genetically modified beings, and the only one who is seemingly able to stand in their way is Digimortal, a deadly, violent mercenary...

Makoto, Yuuya and their classmates were sailing onboard a typical cruise ship when somehow, things went terribly wrong. Now, the boat is adrift, countless are dead, and mindless, murderous zombies roam the halls eating everyone they come across. Together, the survivors must try to live through the night and discover the truth about what happened aboard the vessel.

In the future, the N5S infection is slowly spreading throughout the world, turning everyone it contacts into a zombie-like "Drone".  Zouichi Kanoe and his motorcycle AI companion Fuyu Kanoe are sent out by Toha Heavy Industries in order to find humans resistant to infection and save humanity. Competing bio-enhanced agents from the Data Recovery Foundation have different goals, however: how to best extort the situation for their own profit…

When the meteors hit Japan, many died – but some, after watching themselves perish, awoke to a new life in a strange place filled with bizarre and deadly creatures. Martial artist Shingo, suicidal Mamoru, loving siblings Kyuutaro and Hatsuki and other saved souls must struggle to stay alive and protect themselves from the elements, and each other.