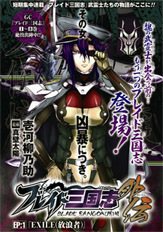 It has been nearly twenty years since the last Great War, and while smaller skirmishes are still taking place across the world, peace is mostly the norm. In the Fuso Empire, Sakamoto Mio is about to join the war effort against the Neuroi alien invaders. She will have to distinguish herself among the other hardworking cadets if she is to become a full-fledged Strike Witch. Soon, she will have the chance to prove herself in battle, as the Neuroi launch their latest brutal attack.

Sergeant Kai takes responsibility for the hardest missions, earning himself the nickname "Iron Heart". Kai claims that he's doing it for promotion but is there something more behind his ambition?