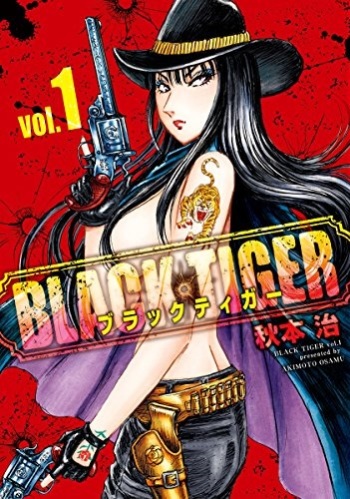 Bounty hunter Hard is given the job of locating and bringing in small time crook Freddie after he skips bail for his robbery of a South Bronx church offering box. However, Freddie got himself mixed up in a far bigger conspiracy and now Hard is in over his head too.

Riding Bean is a one episode OAV by the creator of Gunsmith Cats. Its lead charater is Bean Bandit, aka, 'The Roadbuster'. Bean operates as a contract driver; for good or for bad, if you have the money, he can do the job. This time though, he's been framed for kidnapping the daughter of a wealthy businessman. Good thing Bean is bulletproof.

Early Reins is a tale that takes place in the Old West, in the days of stagecoaches, cowboys, and highway robbery. When a steam-train hauling valuable cargo is hijacked by rogue bandits, it's up to 6 female strangers to save the day. These ladies prove that you don't have to be a man to stop the bad guys.

Gun Frontier: a sacred land for true men; a place where the weak aren't allowed to dream! Tochiro the samurai, the former sea pirate Harlock, and the mysterious Shinunora are searching the western front of the USA. They must face bandits, corrupt sheriffs and many other dangers; but even if it means tearing Gun Frontier from end to end, Tochiro will stop at nothing to find a lost clan of Japanese immigrants. It is they who can help him locate and rescue his sister, a master weapon smith who was kidnapped for her abilities.

While on the hunt for an underage hacker, Faye is the sole witness to identifying a man who causes a tanker explosion that leaves people up to three miles away in comas. The bounty that ensues is the largest the galaxy has EVER seen, 300,000,000 wulongs. It's up to Spike and the gang to solve the mystery of this strange disease, and to stop the assailant at large, for failure would result in all life on Mars being eliminated on Halloween night.

Finding himself yet again in the wrong place at the wrong time, Vash the Stampede is caught in the middle of a bank robbery by the notorious robber Gasback. However, when things take a turn for the worst and the robber's comrades turn on him, Vash saves Gasback's life and both Gasback and his traitorous partners escape. Twenty years later, Gasback is rumored to be planning something big. Bounty hunters from all over the world are gathering in Macca City, the predicted target, to try their luck at his $$300 million bounty. But what business does Vash have in Macca City, and who is the mysterious girl that he keeps following around?

You're Under Arrest! No Mercy!!

Miyuki and Natsumi are back -- but in a new location: sunny California in the west coast of the USA. With traffic problems abounding, the girls were called in to help the Los Angeles Police Department (aka the LAPD) solve the city's sticky dilemmas, but there's one growing problem that has everyone concerned: car thieves! Luxury cars in particular are being stolen, re-tuned, and then sold on the black market. And when Miyuki's own Mustang Fastback is nabbed, it becomes personal. Now, there will be no mercy, no more padded globes, and no more Ms. Nicegirl!