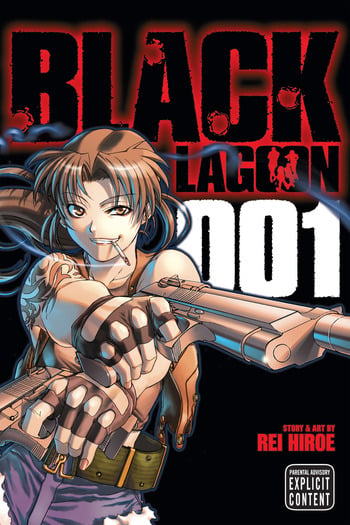 Imagine if the adjective awesome was personified in the form of a man with long black hair, wearing a torn leather jacket, smoking a cigarette, and he has the world's most powerful handgun in a holster at his side. His blood is pure adrenaline. He breathes smoke. He can never die.

Now forget all that, because that guy is not nearly as cool as this series. Black Lagoon is the coolest shoot-em-up series I have ever picked up. First, let's discuss the story. The story is pretty simple to understand, and has a satisfying, easy to read structure. Each story arc is excellent. They have the correct balance of action, drama, comedy, and all the other stuff that gets jammed in there. It also has the "infinite" feel to it, which I personally like. Infinite feel means that this series doesn't really have a place where it has to end, it can go on until everyone dies and become zombies.

If you've seen the anime, and haven't read the manga, you really, really need to read the manga. The anime has a lot more swearing, less blood, and less tits. The manga has more blood, more tits, and more things in general I'm not sure if they showed in the anime, cause I didn't watch the episode with Hansel & Gretel. Hopefully not. Also, they changed one tiny scene, which was more significant in the anime, and just kinda shrugged off in the manga. The manga made the scene......way darker.

Character time, because that is the only real reason people watch/read things, isn't it?! Characters in this series, awesome. I'll try to elaborate. Everybody is special in their own way. I don't see how the mangaka thought up so many different, unique characters. That is all I can say on that matter.

All-in-all, it is such a great series. It is top notch, and I think it is a heavy hitter in it's genre. I think the only series that could rival this is Hellsing. Fucking Hellsing. Take a moment for that to settle in.

This is amazing. It's rare for me to get hooked so fast on a manga. I love the characters, especially Rock and his creepy hobby. But a lot of chapters were wasted on chasing this pyschotic maid and it pissed me off. At least we got to understand our MC in that bundle of madness. A lot of badasserywas displayed in this manga and if Rock and Revy become a thing I will be so happy. All hail chapter 10. I ship it.