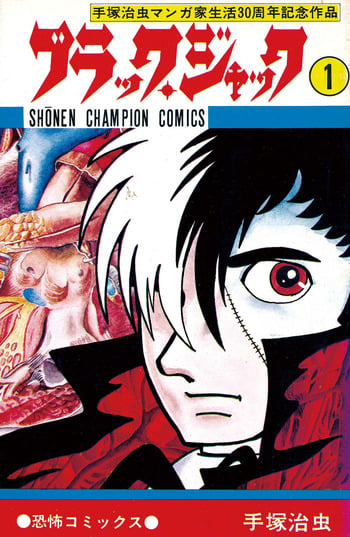 Well, to start off I can proudly put Black Jack on my bookshelf of great works.  This is my first Tezuka work I have read so I can't give to many comparisons i'm afraid but have growing a fondness for Tezuka Osamu himself

Looking at the life of Tezuka briefly it shows that one of his many professions in life is a surgical doctor, that alone has to make you feel the ink on paper tell its tale of the good and evil that men do.  Tezuka being also an activist strikes pen to paper the true world we live in.  Some of the stories have made me cringe in the reality of life on its black cloud to its silver lining.

The philosophy of Dr. Blackjack is in a system that I cannot put a tag on, his basic story is that he is the highest surgeon in the world but he requires the patient to pay "the cost of life" or he wont work, I couldn’t tell you what cost it would be by todays standards but roughly 30 million yen which is 300,000 eur 375,000 usa by 1970's standards. He is firm on his price which would cost the average family to give halve there wealth, this dose make Black Jack look like a fiend but he is a realist who cares not for the system that can be corrupted, especially for were capitalism is strongest.

For a rough 300-400 chapters it rarely spins the same tail which is always a good plus, ive read of people who started in the literary world due to working or attending a hospital and must of for Tezuka.

Well, its is hard to but a rating on someone who has achieved revolutionary turns in there line of work. Im still new to Manga of it's era so cant compare it to what was best at the time. Its rather standard 2d yet 3d when it needs to be. I know that Tezuka did Black Jack in his spare time and is a man who tries to juggle as much as he can in life. The manga was scheduled to a weekly manga magazine so I’m judging that there could of been more detail.

I know is that Tezuka has a 'Star System' were he interconnects his protagonists into himself.  He is a man who has never looked back on a bad decision and has the power over the worlds healthcare system for the rich and poor with his one-man art.  He at times can seem cruel and heartless which it may be but he seems to always come out right in the end. He has ethics with balance for humans and animals alike but puts himself as the alpha.

Besides Black Jack there’s is his assistant Pinko who appears in roughly 3/5ths of the manga, she is more or less the mangas comic relief characters along with a scar faced pig that apparently appears in most of Tezukas work.

There are a few other characters that strike out and a few that make more than one appearance, his mentor who saved his life and inspired Black Jack to take his path is the most important since he was his father figure and a rival surgeon who deals in aesthesia when all else fails.  All characters throughout make important appearances to reflect on humanity, with its goodness and prejudice.

What can I say, the work of man as it is.  It beautifully depicts life with it's own philosophy.  I give credit to the late Tezuka as well as the manga with its story told, unfortunately I wasn’t able to finish reading since no finished English paperback version of Black Jack has been completed so your best option is to watch fansub/doujin on it.

Audience: For those who enjoy thoughtful ideas displayed in the most bizarre way possible.

Black Jack may be one of the most jarring work that I have read so far. The stories shown in Black Jack may not be unique, but the execution is singularily odd. The themes of compassion, environmentalism, reliance on new technology and the limits of the effectiveness of medical science are relatable and interesting. What make these stories odd is that these themes are expressed in both a darkly gruesome and childishly silly manner.

Example: Black Jack lives in a cabin by the ocean. He finds an orca that has been injured and fixes the wounds. Black Jack becomes close friends with the orca, learning how to swim better and acting like a child from an animal friend movie. Black Jack learns about the harmful actions of the orca and has to make the decision about saving it from more wounds.

This story encapsulates Black Jack. A silly story has gruesome violence with a downbeat ending. Black Jack has to make difficult decisions about his responsiblities as a surgeon.

I am not sure about the appeal of Black Jack. The serious ideas about medical science and its responsibilites are ever present, but the execution is so weird that I cannot take them seriously. Some of the stories are heartbreaking, but the insertion of offbeat comedy and overreactions make them difficult to digest.

Recommended?: I do not know who I could recommend this manga to. It is a bewildering experience and the reader has to make the decision for themselves.

I will never forget the sushi master chapter. If you read that far, you will understand.