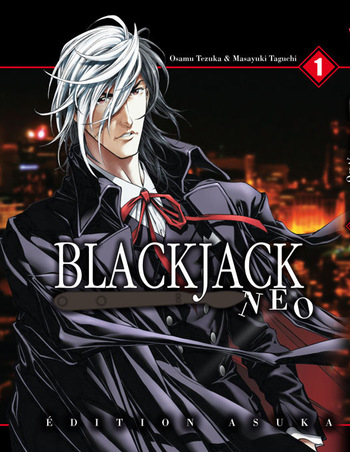 There used to be a legendary surgeon in Japan who simply went by the name K. His speed, accuracy and overall brilliantness were second to none and he helped a countless number of patients. However, five years ago, he disappeared, never to be heard from again. Now, a man who looks identical to the original K has appeared, claiming he is a descendant from a long line of shadow doctors that have been working behind the scenes. This new K is just as talented as the original one and has chosen to continue the work left by the old K. He has vowed as a doctor to uphold the importance of human life.

An adaptation of Yamasaki Toyoko's eponymous novel that chronicles the contrasting stories of career surgeon Zaizen Gorou and friendly doctor Satomi Shuuji, the manga moves the setting from Shouwa era to the modern day.

Give My Regards to Black Jack

Saito Eijirou is a newly established intern doctor, who is forced to take on a second night job at another, much smaller hospital because of the extremely low pay he receives. As he bounces between the two different hospitals, he is forced to dig deeper and deeper into Japan's largely corrupted medical society and starts to question even his own initial believes, as he asks himself just what being a doctor means.

New Give My Regards to Black Jack

"Will you donate your kidney to me?" Continuing from where the previous series left off, Saitou Eijirou prepares for his final internship in the urology department. Hypocrisies from the Japanese medical world, Japanese society, Japanese culture, and the human mind all swirl together as Saitou finds out what it truly means to perform an organ transplant.

Kishi Keiichirou is a pathologist who advises doctors on their diagnoses and whose judgement is widely accepted. Though an eccentric that few people can stand to associate personally, Kishi is passionate about the lives of his patients and a genius at his job.

Tells the story of a fictional town in Japan becoming overrun with a mysterious plague.

Three years ago, Katsumi Yu headed to Africa for a volunteer project as a doctor. However, soon after, a civil war erupted and he was captured by a guerilla group who was desperate for a doctor to treat the injured. He quits being a doctor soon thereafter and gets a tattoo of Lucifer on his right arm as a reminder of his past crimes. Although Yu returns to Japan, he spends his days drinking. After a night of drunken brawls, he wakes up in a clinic run by Dr. Minatono. This shady looking clinic takes in all patients, even those without insurance and those who can’t pay at all, but still maintains state of the art equipment. It turns out Dr. Minatono deals with clients, such as the mob, who are unable to go to regular hospitals due to legal reasons and in exchange receives exorbitant amounts of money to help keep the clinic up and running. At first, Yu rejects the job offer from Dr. Minatono, but situations keep coming up that keep him busy in the surgery room.