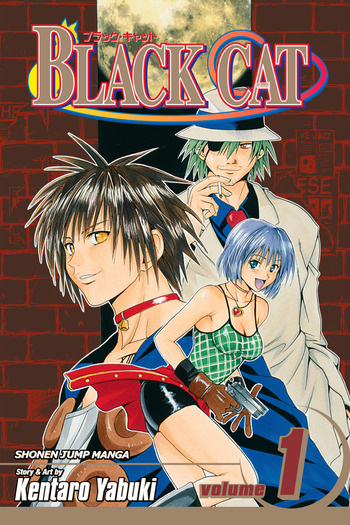 I saw the anime adaptation of this manga for the first time in 2008 and I liked it as one of my first anime. I watched this series again 2 years ago and was mostly disappointed, especially with the rushed ending.

The only thought that occurred to me, why not read the manga to see how the series would really end? Curiosity is the death of the cat

The manga begins quite differently than the anime in that the 2 protagonists are already a team and many events from the anime are only part of the background. How the other characters are added is practically the same.

The plot of Black Cat is very simple, offers practically no twists and turns, so it is linear and monotonous until the end. The problem is, the manga was "somehow" still likable up to Chapter 60-70, until then you were at least entertained by the characters, along with their everyday bizarre experiences. As soon as all the fighting against the opponents started, the manga drifted in a massively disastrous direction.

First and foremost, almost all supporting characters and opponents are empty, boring, and irrelevant, their entire existence did not help the plot any further, whether 50 chapters were used for their fights or not. In addition, there are terribly poorly written dialogues for elementary school students on the level of "We are comrades, that's why we fight against you" "We will kill you because world domination is ours" and that's how it went. Under the typical Shounen principle, Black Cat enjoys by far one of the worst possible implementations of all.

Not even the skills were really explained, which was just one of the minor issues. In the end, however, all clichés were worked off from A to Z, all fights ruined and everyone had so much plot armor that they could probably fight Superman and Darkseid with it and would even win because they believed in their comrades.

To be honest, I can't believe that the simple, personable first 60 chapters are from the same manga as what came at the end.

The drawings were mostly above average, apart from the choreography and the surroundings, there it fluctuated again and again from ok to good.

When it comes to characters, I can't really name anything worth mentioning, because there was simply nothing. Only Train and Eve had some personality, Eve probably the most. But that didn't matter later anyway.

In the end, I'm still happy that I read the manga, so I've cut off one point of my nostalgia. However, the experiences I made while reading this manga are definitely something I don't want to remember.

Premise - There's a retired assassin and his partner and they have tragic pasts and yeah.

Plot Exposition - Tao. You're kidding me. After that awesome introduction...tao. Screw you, energy blasts!

Antagonist - And I'm not sleeping tonight. Very well written and drawn exactly as he should be. My only complaint is that his ultimate weapon, no matter how cool it looks, was less useful than his first weapon.

Supporting Cast - Sven, remember when you were important to the plot? I miss those days. The days before stupid, flat Eve showed up! There's nothing interesting about her! Nothing, I tell you!

Action - May feel a little repetitve, but are exciting and interesting.

Story - It's got some interesting parts, but they can feel outweighed by the numerous stupid elements. Fairly character-driven.

Characters - There are lot of interesting and cool characters here. Most of them don't get the spotlight. On the bright side, both the antagonist and the protagonist and really interesting.

Art - HOW DOES HE DRAW THAT PERFECTLY?

Well, the story itself was pretty basic. There weren't really many shocking twists or amazing plot ideas going on. However, it was definitely enjoyable, and there wasn't anything wrong with it, per se. I guess for me it was just a classic shounen at its finest.

The art was awesome. It was always nice to look at, and I felt like it slowly changed throughout the series. If I had to say, by the end everything looked a little bit prettier.

I feel like the characters are part of what made this manga so enjoyable for me. I fell in love with Train and his quirky personality and fascinating past. Eve was cute in her shyness and intelligence, and by the end her fighting skills were quite impressive. Sven just fit in well together with the two of them and had his own moments to boot.

Other characters I found interesting were Creed and his obsessiveness with Train, Kyoko in all her hilarity - just doing whatever the hell she wanted - which was sometimes cute and heart-warming, other times really cruel, Woodney just being who he is, and many others as well.

I must say I loved this manga. It is probably my all time favorite manga. I can't honestly say it's the best manga out there, but it's the one that has stuck with me for years, one I'm not likely to forget and always to love. I'd say give it a shot, if you like shounen like Bleach, One Piece, etc. there's no way you won't like this.

If I had to recommend one manga that I feel is similar to Black Cat, it would be Rurouni Kenshin. Both mangas have hopelessly lovable main characters with interesting pasts, who are incredibly strong and fight to protect what's important to them.

With most of the stuff that I liked when I was younger, even the childish stuff, I can still go back and see what I liked about it. Not Black Cat. It's just kind of a garbage ripoff of Trigun. If you want a reformed assassin, read Rurouni Kenshin, which is better in every way. If you want gunfights, read literally anything else—the action in this series bears no resemblance to gunfighting. If you want a story, why are you even considering Black Cat?