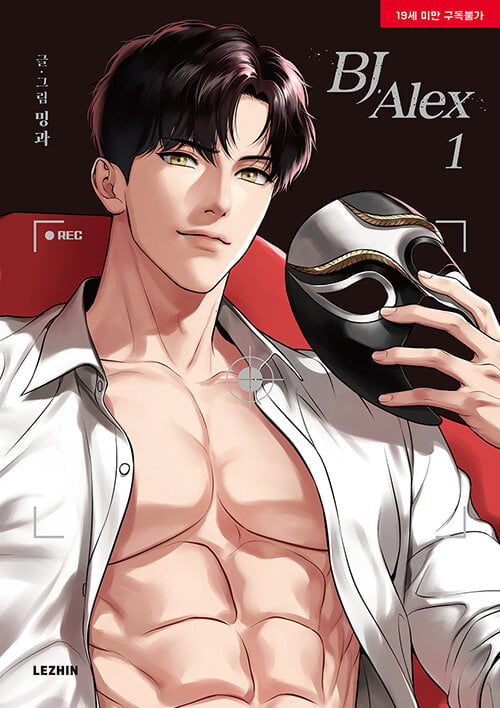 A totally predictable manhwa.  Characters poorly developed,  a top who is abusive, emotionally immature and egocentric, a bottom who lacks of self-respect, who think love conquer everything and who is dumb enough.

Not even the sex scene are that hot, is just a guy forcing another guy who isn't enjoying and when he wants to enjoy it the other guy doesn't care.

I will never understand the need to romanticize physical, mental and emotional violence in yaoi mangas.

A work that definitely doesn't bring anything new or do the old on a good way.

A new release by Lezhin. The main character is a cute but nerdy guy who obsesses over a broadcast jockey (hence BJ, get your minds out of the gutter) Alex. He even gets a part time job to send Alex money in the hopes of getting noticed. Eventually he meets his idol only to find he's actually a jerk. But since this is BL, you can guarantee their relationship will get very interesting.

In addition to the interesting/kinky story, the artwork is beautiful.

The art, as it’s seen, it’s great, a different style and a great design, from the characters body and clothing, to the sceneries.

The storyline seemed to have no way to go at the beginning, the autor tried to explain the characters’ behaviour with backgrounds of their past, but I think all of it could have been more detailed and the explanation more expanded.

However, the “love” plot was followed and the dramas were never missed...

It was a bit uneasy to follow, but the author knew how to make the readers feel happy with the ending.

If you’re looking for some good sex explicit content with great drawing, here you have.

I honestly have a lot of complaints when it comes to this manhwa. This was actually my first BL comic, and it was hyped to death on Tiktok, so I read it. I was going into it with some expectations in mind: a mature, cute romance and a plot surrounding sex work. This manhwa didn't deliver on those expectations. If you are coming to BJ Alex thinking there is going to be a tight-knit plot with well-written characters, then you might as well just turn away and go read something else. But let's get into my critisisms.

The plot....Well, there isn't one. We could just boil this manhwa down to one word: sex. That's it. And on top of that, some of the sex scenes were...uncomfortable to read. If I'm not mistaken, Jiwon got overly aggressive during sex twice, putting DG in physical pain? They never had a proper conversation about that, either, it was just swept under the rug after he "apologized". The premise was very interesting to me, though. An adult streamer? This could've opened up so many conversations about sex work and the pros and cons of having a job like that, and so on so forth, but we didn't get any of that. In fact, Jiwon being a "cam boy" was basically forgotten until the plot needed DG to say or do something embarrassing. And as if this wasn't enough, there's also a glaring piece of the "plot" that was never brought back up again. The episode where that one homophobic guy found semen on the couch and tried to figure out who left it there....That was literally never talked about after that episode.

Moving on to the characters, starting with the ones I have little to nothing to say about. Chanwoo is a walking gay stereotype. The one that's sex-crazed--and that's pretty much all there is to his personality. MD intrigued me as a character, but he wasn't important to the plot whatsoever, and was basically just there to give Jiwon another reason to be pissy. I liked Chanwoo and MD's special episodes, but I don't think they're an accurate representation of a sub and dom relationship. DG is boring, stupid, and naive as hell, sorry. The fact that this story takes place in college....How is he so dumb? Also his backstory episode was so rushed and it came off as if the author couldn't have given less of a crap about it, like it was a thrown in there last minute to give us a reason as to why DG is such a dull character. And finally, Jiwon. His backstory episode was very cliche and has been done to absolute death in storytelling (the kid that always had to be perfect, blah blah blah), and she added nothing new to the already "done to death" cliche. I did (kind of) like how the author tied his backstory into why he became BJ Alex, though. I thought it was interesting, but that's the only depth that character gets. Also, I understand that Jiwon wanted to be loved and everything, which is why he starting doing cam work, but how did he decide to do cam work of all things? I have no problem with cam work, but how does only wanting to be loved and praised by people make you immediately jump into taking your clothes off for money? I just don't think him wanting to be an adult streamer, out of all the things, is very believable. I wish that the author would've given him more of a reason to get into adult streaming as fast as he did, because it seems like he didn't even think about the possible repercussions and dangers of doing a job like this, like at all.

Lastly, I want to talk about Jiwon's "character development". He had none. Yes, he became a different person who no longer agressively rummaged through DG's ass during sex. And yes, he now actually seems to care about DG and his feelings. BUT...it literally took him a week to start acting this way. Given his backstory, his past actions, etc., I would've thought it would take more than a week for him to just start being a better man. One thing that made me cringe out of my seat was when DG said "I love you, Sunbae", even though they had been dating for like day. And don't even get me started on DG saying, "You've done so much for me". I'm still trying to figure out what exactly Jiwon did for him, besides buy him expensive things.

They're in college; I was expecting a more mature romance, but I got absolute shit.

An ongoing Lezhin manhwa about a university student who's obsessed with a Broadcast Jockey (not the other BJ) named Alex, only to discover his idol is none other than a student in his same field.  The characters are realistic for the most part, a bit extreme but it's fiction so that should be expected.  The story seemed like it would be forced but it's amazing to see them interact and learn more about each other.  And the art is amazing, as was expected since everything I find on Lezhin is beautiful.

Definitely recommended if you like BL, and cute or odd couples.