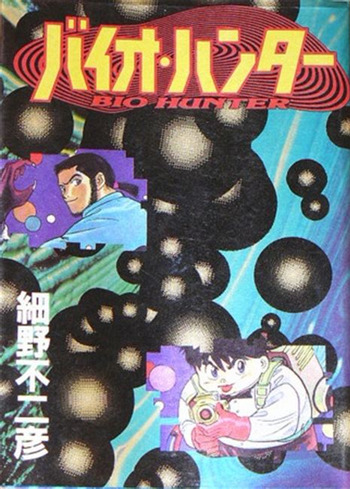 A young mystic without a past, Kujaku was born under a dark omen possessed of incredible supernatural powers. Raised by priests, he has learned to use these powers for good. But the evil Siegfried von Mittgard seeks to steal his birthright, and rule the world as the Regent of Darkness. He has dispatched bloodthirsty minions to destroy Kujaku before he can awaken to his destiny. Now, Kujaku must unravel the riddle of his past, before the power within consumes him.

You're Being Summoned, Azazel OVA

When summoning a demon, the summoner must supply a worthy sacrifice – something important to them – as an offering. However, when Rinko summons the terrifying Azazel one day, she only has cleaning in mind and stew to show for it! Alongside the equally-as-frightening Moloch, the two demons must cater to her and Akutabe’s whims, but there’s a catch: in the human world, within a protective barrier, they take the form of two cute, cuddly creatures!

In the streets of Tokyo, demons run rampant, silently killing and possessing innocent citizens against their will. Meanwhile, in one local high school, the once ridiculed computer loving Akito Kobayashi has returned, armed with the knowledge to summon the greatest demon of them all, Ose, to destroy all of humankind. Along with Takehiko Kuki and Marika Kusaka, spiritual ninjas that have spanned centuries protecting the gods, one man must fight to stop the evil god from resurrecting, before it's too late...