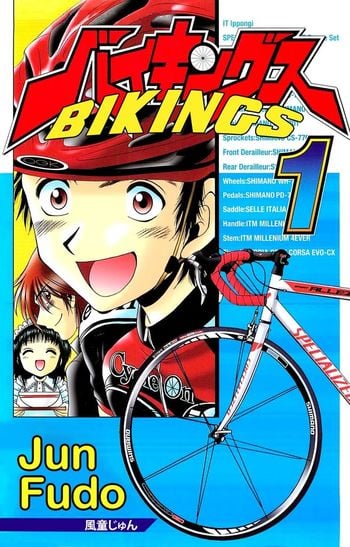 Ami Kurata is a first year college student with no special qualities. One day she happens to notice someone riding a folding bike, immediately falls in love with it, and uses all her savings to buy one. She eventually gets introduced to the world of long-distance bicycling and road racer bikes, and she forms a cycling team called Fortuna with four other female college students from the same school. Their goal is to ride in a "brevet" or long-distance event called "Fresh".

Sakamichi is a die-hard otaku; he loves anime and manga, and rides his clunky bicycle over 90 kilometers to Akihabara each week for the latest toys and games. Upon entering high school, Sakamichi is thrilled to meet others that share his passion, but soon discovers that the anime club is defunct and in need of members. Meanwhile, a skilled cyclist and fellow classmate Shunsuke has his eye on the boy, having seen his incredible speed, even while riding such a heavy “mom cycle.” Now, Sakamichi must decide if he wants to stick with his would-be anime club, or join Shunsuke and other new friends for the ride of his life in the Competitive Cycling Club, where fierce races and other adventures await them!

Tsujido Rintaro is an up and coming professional cyclist that has his very first race at the lowest rank, the A3 division. Trained by the famous Akiya, Rintaro’s name has already spread throughout the country and there are people that have it out for him because they have ill feelings towards the once hated Akiya. Rintaro doesn’t just have his career and passion riding on each race but after his father became brain dead from a horrific car accident, he has been paying for the expensive hospital bill. With a life on the line, Rintaro races with everything he’s got but he's about to learn the harsh world of professional cycling.