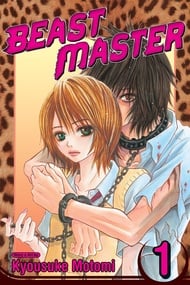 Yuiko loves animals, but given the overly-aggressive way she tries to show her love for them, they always run away. One day Yuiko meets a strange boy named Leo who seems to be more beast than human; his fierce eyes frighten everyone away, and he harbors a dark secret: when he's threatened or sees blood, Leo loses control and behaves like a wild animal. Can Yuiko tame this wild beast, or will he run just like all the other animals she loves?

I'm a Kyousuke Motomi fan. His writing is excellent, his art is spectacular and his characters are, for the most parts, phenomenal. However, Beast Master isn't the example of this. Beast Master IS pure fun. Through out the entire manga, I was having a good time. It's not inspirational, it's not powerful, it's not at all memorable and the romance isn't very heartwarming. But it's enjoyable. First of all, I consider to most important part of a manga to be its characters. Characters trump over everything, even plot. Beast Master features your typical animal-loving-but-hated-by-animals female protagonist and a wild animal-like love interest. Needless to say, the love interest is the more interesting out of the two, although the main protagonist's personality saves her from being too much of a stock character. The supporting cast, unfortunately, is throwaway. The love interest is actually the most memorable thing about this manga. The plot itself feels really, really rushed and I'm not just saying that because of how short the series was; I LOVE short manga sometimes. But it felt like Kyousuke Motomi got an idea and then ran out of enthusiasm for it and wrapped it up neatly, conveniently and as quickly as possible. I love Kyousuke Motomi's style of pacing, but this manga was just balanced poorly. The art, as is expected, was top notch. The funny bits were funny, the dramatic bits were dramatic and the writing didn't really add to that so much as the art. As a matter of fact, I found the writing to be quite creepy at times, but maybe I'm just reading too much into it. I liked the ending, because it was an adequate conclusion to a satisfying story. It's a fun read and I actually thought the fights were the most enjoyable parts, odd for a shoujo. The art REALLY added there. Don't look for too much in this, but if you just need characters to love for a little bit, read it.

The epitome of sexy friendships, "Beast Master" is a short manga which has girls everywhere swooning. Story: Kubozuka Yuiko loves animals, but, unfortunately, suffers from Sakaki ("Azumanga Daioh") syndrome, so animals hate her. The persistent Yuiko won't give up, and she ends up meeting Aoi Leo. Leo is covered in blood and has feral-looking eyes... but Yuiko isn't afraid of him! Well, turns out Leo is a little like a beast, and Yuiko tames him (SPOILER ALERT XD). So, if the title didn't make it obvious, this is going to be a kind of S/M-type shoujo romance. Well, it's actually more of a friendship. With zero sadism and even less masochism. This story is cute and all, but, if you couldn't already tell, I can't stand heroines who sit around waiting for their men to save them. Yuiko gets into a bunch of instances where Leo needs to jump in and save her. Yet, somehow, this never happened to her BEFORE she met Leo. Go figure. And, since we know Leo is gonna beat the crap out of the guy before Yuiko hugs him and tames him, all anticipation is lost. Mangaka Motomi Kyousuke has got this formula down pat. Art: This is probably the high point of the manga. Sexy male characters and pretty female characters exist in a world of generic-but-nice-looking backgrounds. The character designs are purely meh: Yuiko looks like, well, a pretty female character (she acts like one, too). Leo looks like an untamed animal--he has messy black hair and wears illegal amounts of guyliner, but he looks sexy as hell. (Just saying. Now STFU.) The only other character worth a mention is Toki. There. I mentioned him. Characters: Nothing special here! Yuiko kind of got on my nerves, along with good ol' Toki. Leo is cool and all, but he could have been so much more. Another chapter or two and he could have gone from "kind-hearted wildcat" to a deep, heartbroken lover or become badass. There's just no freaking development. And no one, NO ONE can call Yuiko's taming of Leo "development." Overall: A nice shoujo manga for fans of "Vampire Knight." It has plenty of romance, a miniscule amount of violence, and its fair share of eye candy.

This is the first manga I ever read. No seriously. I read a sample online, I bought and read it like 3 more times over the next couple of weeks then I branched out and became manga obsessed. Now i have a bookshelf. It made that big of an impression. Seriously its sweet and romantic and the characters demand hugs, or at least I felt like hugging them all as I read. It could be that I am a great big sucker but even so its amazing. Romance was never so sweet and innocent.