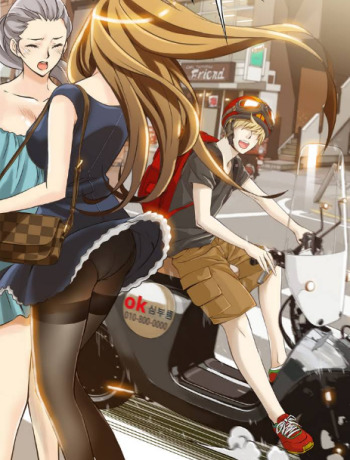 Ok, so this isn't exactly cohesive. It's like someone trying to juggle too many balls at once, and dropping them all. At its core, it's a story about Lee Sin's quest to fix feir erectile problems. You see, fe's hypersensitive, but also unable to get hard or ejaculate. And for some reason, a cute delivery boy named Yong-Gi is the mystical cure for feir problems. Lee Sin has two daughters, Hana and Yona. Hana has an encounter with Yong-Gi, and this is how their two lives intersected. Yona doesn't seem connected to the main plotline, but they've included fem in a random side plot to get some extra sex scenes in. 'Cause we all know that's the actual focus of this manhwa: sex scenes. In a sad way, it's pretty funny that even with a plotline based around a sexual topic, most of the sex scenes add nothing to the plot. The only one which seemed relevant was with Lee Sin and the doctor's daughter, but then it turns out that most of that was just an unnecessary sexual fantasy.

The manhwa ends without any sense of resolution or real indication about how all the plotlines (such as Yona's) are supposed to interconnect. It claims that this is just the ending of the first season, but I for one hope they don't ever pick it up for a second season considering how disappointing this first one was.