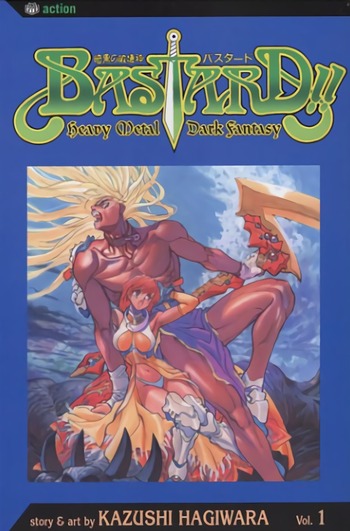 The Four Lords of Havoc have one terrible goal – to awaken the god Anthrasax and recreate the world. To stop them, Yoko, a maiden of Metallicana, awakens the ancient wizard Dark Schneider from within a 14-year old boy by bestowing upon him her virgin kiss. The only problem now is that the most chaotic, lecherous wizard in history resides inside the body of an innocent child. Even worse, he’s determined that neither hydras nor minotaurs should stand between him and his dream to conquer everyone and take the women for himself… all of which is less than convenient when trying to save the world!

Bastard!! Heavy Metal Dark Fantasy is a hilarious and action packed fantasy adventure. Self aware of its nature, 4th wall breaks are not uncommon in this title. Story and Characters We follow Dark Schneider, a recently unsealed wizard who was trapped in the body of a young boy named Lushe, as he fights his way through monsters and armies to achieve his goal of world domination and to attain his own personal harem, basically. Early content deals with Schneider's past allies that are now his enemies, alwhile they try to reawaken a being that is pretty much the walking apocalypse. So despite being a comedy, the story does have a dark and heavy tone to it. Midway through it gets even more so when it takes inspiration from the bible. I won't go into detail out've fear of spoilers, all I'm going to say is that it's amazing. As a character, Schneider is quite the despicably charming lead, but not without plenty of depth to him. He's a very fleshed out character that shows his redeamable qualities often. Great and memorable supporting characters such as Gara, Lars, Abigail, and Kall Su, however, the female cast is prone to ecchi anticts. Well, this is an ecchi afterall, so the only character drawback I can think of is that some of the women in the series go from being a strong independent type 1 minute and make a complete 180 after running into Schneider, turning them into the breathy weak in the knees type. Art The art of Bastard!! has a very dark and bold texture, with consistently beautiful illustrations of creatures that appear all throughout the series and great detail to the general environment. Early volume character designs have a very 80's look and feel to them, as you would expect being an 80's manga. It's nothing to complain about, being good for its time but is dated by todays standards. For those that dislike older manga art, don't let that put you off as the art does catch up with the times and shows to have improved immensely over the years. In volumes 11 and 12, you begin to see a difference in the refined detail of the art compared to earlier volumes, and by the time you reach volume 15 there is a drastic change in drawing style from Kazushi Hagiwara, and with each passing volume the art only gets better. By chapter 125 (Volume 23) the arts evolution really shows and is absolutely gorgeous, honestly, its up there with some of the best manga art I have seen to this day. Boobs and hips may have become 3x larger than they were before for no reason, but the ever improving art style is greatly appreciated. I've heard that Hagiwara has re-illustrated the first several volumes to update and match the later art. I'm unsure if you can actually find them anywhere online though. Conclusion Bastard!! is a wonderful gem in the Shonen category, being alot more mature than most in it's genre (or more Immature depending how you look at it lol). Unfortunately there is a drawback, being that it is an incomplete series that has been on indefinite hiatus at 27 volumes for a few years and with no end anywhere in sight. Viz also dropped publication at volume 19, sadly. We'll just have to wait for Hagiwara to crawl out of Hiatus Hell, just as Dark Schneider broke through the gates of Hell itself. 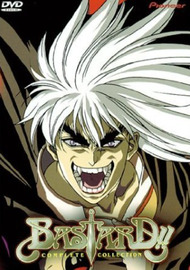