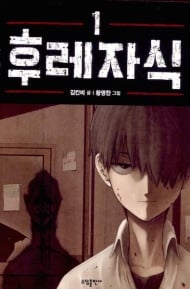 Bastard was an interesting read, I've gone through the entire webcomic in 1 sitting. To write a complete review I did have to include some twists which happen in the first 3 chapters. So, if you truly want to be surprised I suggest those 3 chapters first, those chapters also set up the tone of the fear for a particular person. Plot Meet Jin, a high school outcast. Why? Because of his glass eye, poor health and lack of social skills. How did that happen? Because his father threw him off the side of a building when he was somewhere around 6 years old. Why did his father do that? Because his father is a cold-blooded serial killer without regard of human life.  Ever since that incident Jin had to live in fear of his father and be his accomplice in serial killings. From luring in woman, to knocking them out so his father could handle the rest. One day Jin got in trouble at school where a bully kicked his ass so hard his heart stopped beating. But thanks to the new transfer student, Kyun, he could live another day. Unfortunately, Kyun is his father’s newest target so Jin wants to make sure Kyun escapes his father’s grasps.  Story What follows is an exciting and thrilling cat and mouse game between Kyun, Jin and his father which will keep you on the edge of your seat. The father is portrayed so diabolical he truly is a living demon. While Jin is hiding Kyun she is able to slowly open his heart so that he wants to stand up against his father and stop the killings. This brings in some comic relief as Jin never learned about sexuality but starts to develop feelings for Kyun. So, in order to stand up against his father Jin will face his bully and ask him for training. Jin however is physically very weak so the story revolves more about his mental growth as his physical growth. Jin has to conquer his own inner demons and be able to stand up against the biggest demon, his father. Turning this into a psychological battle.  Art The art is rather dark so expect but that is to be expecting in such a grim story. The style is nothing special but what did jump out are the scenes with the father. One second he can be the nicest guy in the world and the next image he looks like the devil himself. These terrifying images help you sitting on the edge of your seat as you never know when the father will jump up to catch Kyun and Jin. Characters Jin the outcast, cold and ruthless because of his upbringing but this story displays his maturing through puberty by discovering sexuality and defying his parent to go his own path. He is analytical and a great actor which allows him to avoid his father’s grasps. Follow his struggles about coming to terms with what he has done to mature himself. Kyun is the only downside on the characters, although she is nice and adorable she is your regular female character, the maiden in distress. She will get herself in trouble by ignoring Jin after which Jin has come to rescue her despite being warned.  Jin's father, Dong-Soo, is the prefect villain. Ruthless, terrifying, smart and wealthy. He is able to leave no evidence of his murders and is able to find his prey with the tiniest leads. But what surprised me most was the ending where the author manages to alter your opinions a little bit about Dong-Soo. A little bit though... Manny is the top bully at Jin's school. Despite hanging around with Jin for the wrong reasons he turns around and becomes Jin's first friend. However, he shows you it is hard to change who you are. Even if you are willing to change your environment may make it impossible. Despite being a bully at start you manage to slowly like him after knowing more about him and which makes it interesting to see his rollercoaster like emotional state about his friendship with Jin. Can Jin and Manny truly be friends or is it doomed for failure? Overall Overall this is an exciting thriller which includes some romance. This is a great cat and mouse story where you follow each character’s emotional progression. If you like horror like thrillers where you have to escape from a serial killer you will surely like this story. And else this is still a great psychological story about the maturing of a young boy through puberty.

One of the most amazing stories I have ever read. It certaintly lives up to the genre of "Thriller" and it has great pacing character development and themes throughout, I could not think of a better ending than what the author did, the whole work is simply a masterpeice. 10/10 If you like psychological thriller with deep story telling this is for you.