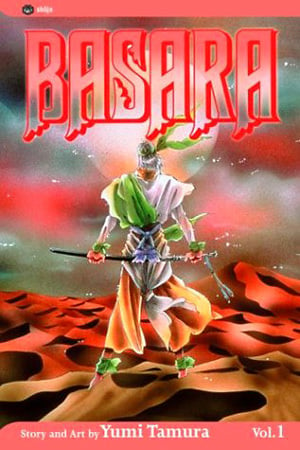 The last manga series that I finished reading during 2018. Although I haven't read or watched a lot of shojo series, I can say with absolute confidence that Basara is one of the best shojo, no, best manga to ever come out in the 90s.

I only got to read part of the series when I was in high school, then I heard that the author's other work 7 Seeds was getting an anime adaption, so I was motivated to finish Basara. So glad that I did, cause the series itself is emotionally powerful. The series is a war-drama romance, much like Akatsuki no Yona. The world itself has almost been wiped out, due to war or natural disaster.

Now the story starts on a strong note when Sarasa has to take the place of her brother as Tatara and lead her people in rebellion against the royal family. Sarasa has her own inner struggles to find out who she is while developing into a charismatic, capable leader. Shuri is of course another important character who plays an important role in the story and is also the love interest of Sarasa. And he too develops as the story goes on. Ageha is also a big character who supported Sarasa throughout the story and is easily loved by fans of the series.

The art style really grew on me as the author drew some of the most gorgeous scenes in the series. But the series also dealt with themes of identity, coming of age, war and the cycle of hate, but also love and its power to change.

This may be Tamura Yumi's best work, but I'll have to see 7 Seeds first. There's also a 1999 anime that covers the first five volumes if people are curious about the series. Definitely my favorite shojo series of all time!

I remember reading this back in 2010 just over a year of being a manga reader, came across it because of 7 seeds (which at the time was incomplete) and written by the same author.

BE WARNED THIS REVIEW MAY CONTAIN SPOILERS

Anyhow for the STORY
Basara takes you to a post-apocalyptic world that was destroyed by humans and natural disaster but is still striving with what it can.

A set of twins were born and it was prophesied, that one of the twins is their long-awaited savior and this is where the story began. According to my friends, the start was rather slow, but I found the pacing to be just fine and I like stories that give a little time to introduce us to characters, their connection with each other and such. AND I especially love seeing a childhood story then coming-to-an-age transition.

A strong approach on the plot as Sarasa took her older twin brother name as Tatara the savior when he had met an unfortunate death and lead the remaining people of her village to safety and eventually a fight for freedom against the Royals.

I love all the characters in Basara righteous or corrupts as everyone has their own beliefs in life and yes there is the ultimate douchebags, even if I cant sympathize I can understand why they have taken those actions.

Focusing on our leads

Sarasa at the start is a cry-baby but still strong as she knows what she needs to do but struggles to go through as she believed that she doesn't have any right as she is only her brother's replacement. But over time Sarasa grew to a strong, capable and charismatic leader. Sarasa obviously has her own inner turmoil, as a teenaged girl and having taken another person's identify she struggles to who she really wants to be.

Then there's Shuri. Shuri is easily in my top favorite male lead. Shuri is charismatic king and is overall confident in what he does, he knows that he wants and how to get in. But life is not that easy there are obstacles even if you are part of royalty. Shuri is Sarasa's love interest and vice versa thus the star-crossed plot.

This star-crossed plot for me really works and is one of the main reasons why I keep on re-reading this manga every I'd say 6 months to a year (All depends on my mood). The reason it works for me was when they are together they can be themselves and open up to each other, healing each other wound even though... dun.. dun.. dun... spoilers here [they cause each other wounds and pain]

AND THEN MY FAVOURITE CHARACTER IN THE ENTIRE SERIES!
Ageha of the Blue nobles, I don't want to get into details with him cause I would end up making this review longer which already is. But what I could say is that he is easily the favorite for the fans of the series as Ebonyslayer said.

Now, the arts. Well, I remember reading a lot of reviews like way back how the art is intolerable and how hard it is to distinguished who is who and is the reason why others do not read the rest of Basara and 7 seeds.
But I found the art mesmerizing, it really gives that 90's art style feel to it and the character eyes especially the females I find them beautiful. Ever since I got into manga, I never really had issues with the arts as long as the story is piqued my interest and I can tell who is who then I can read through it.

I supposed each to their own, still do not let this discourage you from giving the manga a go as it really is good the war-drama that plays out is simply captivating.

Yes yes, I know I give it all 10 for all the categories.

Yes, I admit. I'm such a sucker for star-crossed lovers, strong female lead, apocalypse or post-apocalypse stories and destiny plots that conveniently this manga has to offer. This....for me, had honestly taken the cake.

AND I would definitely recommend this to others!