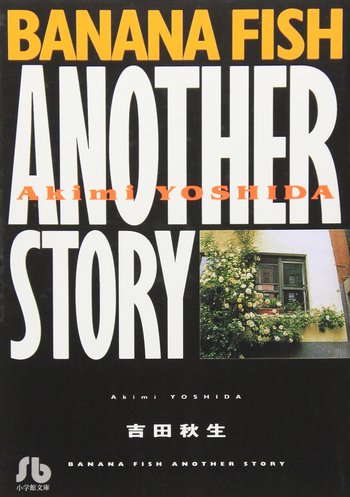 Brief summary of the 5 chapters:

Fly boy in the sky- Details Ibe's first encounter with Eiji. Eiji's still a 17-yo high schooler doing pole vaulting, he was photographed by Ibe and then there was also a competition between him & a fellow rival going on... Biggest shocker was Ibe's age reveal- 25 lol. We all thought he's in his 30s or even 40s with the way he looks daaayum.

Private opinion- How Blanca came to accept pedo Dino's request in training Ash. Told from Blanca's perspective. This man of a man offers a lil hope of salvation to Ash's fucked up life. Blanca's a real protector from the dark folks. Straight facts.

Angel eyes- Pedo Dino sends Ash to "reform school" with a bald Shorter babysitting him. Ash was 14 in this & basically "jailbait" (LITERALLY) to the prison horndogs, read more to see Ash turning the tables (ALSO LITERALLY LMAO IT NEVER ENDS).

Garden of light- Takes place 8 years after the death of Ash. Shows Ibe's niece Akira-Chan in New York with a 28yo Eiji & 23yo Sing. Other characters have aged as well like for exp Michael (Max's kid). I would say this chapter provides final closure for both Eiji & Sing, Sing was deadset on the idea of Eiji letting Ash go but was refuted by Eiji's willingness to preserve the memories no matter how painful it is.

If the pain in the manga and anime wasn't enough then go ahead and read this fellow masochists. Honestly I already expected what's going to happen in the final chapter of the manga but this extra chapters damn hit me like a train. I was a messed for a week, can't even function properly and it's been 35 years since its release, no one will move on.

Worth mentioning New york sense photobook by Eiji, the real closure to the story!!

if you liked banana fish and want to fill a void temporarily you should read this manga. most of the chapers are wholesome backstories but garden of light is really sad. garden of light is a sequel to the anime/manga and brings us to the future, 8 years after ash's death. i thought i was done sobbing after what seemed to be a week of completing the anime, but this chapter really brought back all the emotions and i found myself tearing up again. definitely broke my heart.

okay so ill be solely talking about garden of light bc it really confuses me why the author decided to kill off ash. of course death is a way of life but i feel the story could have really done without ash's death. there was really no point, especially when ash had finally been released from everything that haunted him. it was really sad to find out that lao didn't actually stab ash in any of his vital organs but the fact that ash actually decided to let himself go bc of eiji's letter. dang seeing eiji and even sing really pained me. can't imagine the regrets eiji or sing might have felt. it was such a stupid death and could have easily been avoided if the characters just freaking communicated lol. gosh that was a rollercoaster. rest in peace to all the real ones in this series. ash, shorter, skipper, and griffin sry if i missed anyone.

The side stories are immensely painful. I'm not sure how I'm going to get over this pain. I know it's been a year, but I don't think I'll ever overcome Banana Fish, let alone these side stories. The emotional pain this series caused me is eternal. As you can see, I'm still suffering from this.

Angel Eyes is not only Shorter's point of view, but also his perspective on events and his sister's involvement. It was also the start of Ash and Shorter's friendship. Then we get to see a younger, more raw Ash here, and Yoshida delves deep into rape culture, which I appreciate in this manga. At the end, it's lovely to watch Ash genuinely happy when he's surrounded by good people like Shorter.

They led me to believe that Garden Of Light would provide me with closure, but they were mistaken; it provided me with a whole new world of grief and pain.  But how do I cope when Eiji isn't looking for someone to fill the void and no one can take Ash's place? Those panels of Eiji collecting all of Ash's photos and putting them in his gallery with the title "Dawn", Ash's name, moved me to tears.

In Private Opinion, my heart will never stop bleeding for Ash. Blanca is an intriguing and complex character. He taught Ash how to defend and protect himself. I know he had a bad upbringing as well, but he had an odd way of protecting Ash.

Fly Boy In the Sky is a mesmerizing side story that establishes Eiji's character in a different realm than Banana Fish. Personally, it provided me with a new perspective on Eiji's life. Here, we get a glimpse into Eiji's school days and learn about how he came to be who he is, his hardships, and his dreams as a young boy.

Meanwhile, Ura Bananas were a source of joy for me. It makes me so glad to see Ash happy and pain-free. It's such a relief to see them happy and discussing fan messages.