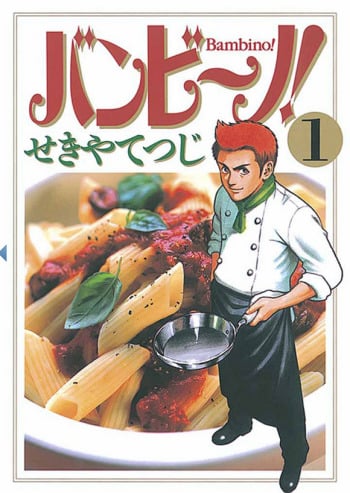 In quick summation, Bambino! is one of the best cooking manga out there and the fact that as I type this there is no synopsis on this site for it means that it's not very widely known, and that's a crying SHAME, in my opinion. The Wiki page, of all things, has very little information on it! There isn't even a synopsis there, either! It's WIKIPEDIA. Story: Bambino! is the story of one red-haired (IDK how that happens) college-aged guy named Shogo Ban who wishes to become a professional chef. He eventually finds himself working at the Trattoria Baccanale, Roppongi's best Italian restaurant, and while there he works to establish himself as a competent cook while cultivating a newfound passion for Italian cuisine.  Because he is a greenhorn, he is quickly given the nickname 'Bambino', or 'Bambi' for shit, which in Italian means 'Baby'. The employees and owners in this restaurant are very adamant about capturing the feel of what an Italian restaurant is; to remain as true to the source of what they're emulating in a place as objectively non-Western as Japan, the characters frequently speak bits of Italian while cooking (Italian cuisine and cooking, much like the French, has many words that refer to certain foods and cooking processes). As a result, the story is even more believable and authentic. What really drives the story are the characters (which I will get into later) and the situations that they are faced with. Trattoria Baccanale is run like Hell's Kitchen only instead of a talented British man screaming at you, it's all of your Japanese coworkers telling you to hurry the fuck up with the pasta fagiole.  There are certain assholes that Bambi encounters that want to jeopardize his hard work and good standing in the kitchen, and he quickly realizes that simply telling off another grown-ass adult is both unprofessional and futile. It is frustrating to me and others who many read this series, but it's a fact of life that while at work your emotions shouldn't get the best of you when it comes to dealing with antagonistic elements that frequently appear in your profession.  It's not so much a slice-of-life or drama per se, but the hurdles that Shogo Ban encounters while establishing himself as a legitimate talent in the kitchen. Make no mistake that Ban does fail, but it is through hard work, discipline, and a little innovation here and there--not innate talent--that he manages to either succeed, impress, or scrape by his superiors' expectations.  Art To further drive home the seriousness that the manga holds, everything is drawn as realistically as possible, and that goes for the food as well. Lines often deeply carve into characters' faces for dramatic expressions while they also delicately accentuate certain aspects of cuisine. The art style is certainly Seinen in every sense of the word from its resolute heaviness.  Characters Shogo Ban is a hardworking, determined protagonist and that's honestly all I can really tell you about him right off the bat. His personality and attitudes when it comes to work and people in general are further elaborated when he is faced with situations that require him to nut up or shut up, and Bambi is not one to back down from a challenge. Since the world of professional chefs mainly worry about your results and ability to perform well under pressure, there are many different people that Bambi has the pleasure (and misfortune) to interact with. Some of his coworkers/customers are downright assholes, cheaters, liars, passive-aggressive, or saboteurs that either feel threatened by Bambi's talent or don't recognize him as worthy of working in the kitchen alongside them. It makes for great drama and helps flesh out Bambi's character more when he faces them head on and proves his capabilities through his cooking. The jerks in this world aren't given sobby backstories that attempt to explain why they're jerks in the first place but do present them in a realistic light that prevent them from being portrayed as villains for the sake of being sadists and assholes. Some antagonists are not bad people but the challenges they represent serve as opportunities for Bambi to grow as a chef and a professional employee in the Baccanale. Overall This is one of those hidden gems in a niche genre that fans of cooking must take a look at for its faithfulness and devotion to not only the portrayal of the microcosm of a kitchen in a high-end restaurant but the authenticity of Italian cuisine. 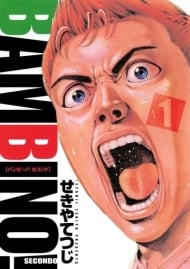