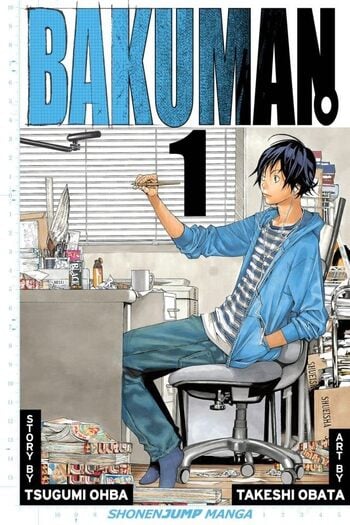 Both Bakuman and Genshiken take a look at Otaku Culture. While both approach it from different angles - with Bakuman looking at two boys trying to publish a manga and Genshiken focusing on the otaku themselves - both are entertaining, so if you enjoy one, it's worth reading the other. 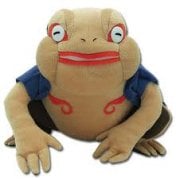 Both series focus on a similar subject matter, the late teen/early adult years, the life of an otaku (more creating in bakuman more consuming in genshiken), and being awkward in love. They also have quite similar protagonists. If you like one I recommend the other.

Both manga are about a mangaka in his teenage years.

I feel gekkan shoujo is more os a parody of a shojo love story, so the gags fill in more than the romance aspect.

In Bakuman the story is presented in more of a shonen form where friendship, harwork and willpower are the main lessons of the story and romance also takes a back seat.

So all and all, both are good comedies that let you peek into the world of manga creation

The main characters of both anime are very involved in manga, they both look for ways to improve their manga.

Tanaka Yukio is bored with life; he lives unremarkably from day-to-day, never doing anything to make himself stand out. With barely any presence, no social life and an embarrassingly bland taste in music, Yukio doesn't have much going for him. However, after a chance meeting with the outspoken rocker Ryusuke and his peculiar dog, Yukio's dull existence changes forever. He receives an old guitar, begins to learn how to play and is discovered as a talented singer, earning him a way into the new band Beck. As Yukio begins to shred his way to the top alongside his outrageous band members, will he be able to transform from an awkward and nervous young boy into a man worthy of being an idol, and will it be enough to muster up the courage to confess to his old friend Izumi? One thing's for sure: it's time for him to make a stand, on stage and in life!

Both mangas are inspirational, serious stories about a young boys striving to achieve their dreams.  Both main characters are slightly shy, but very dilligent, and dedicated to the work they do. The main difference is that Beck is about forming a rock band and Bakuman is about drawing a manga.

Both titles have very unusual romance,  that doesn't take the center stage, since that spot is reserved for "achieving goals". Both are very detailed in portraying what hardships awaits those, that want to try their skills at those fields of work (manga and music).

OPUS contains the mastery of both realism and surrealism that would make Kon famous in Perfect Blue, as a manga artist becomes drawn into his own work and realizes the deadline he's up against is to stop a vicious serial killer before he can spill more innocent blood--not merely ink!

'Opus' is another manga-about-manga, written by the late and legendary anime director Satoshi Kon early on in his career and features his trademark blurring of the lines between fantasy and reality. The story centers around a mangaka under intense pressure to finish his graphic novel in a timely manner, but it turns out one of his characters isn't too happy with the 'shocking twist ending' he's decided to go with. Makes you wonder what might have happened if Mashiro and Takagi weren't so good at handling stress...

On a cold and stormy night, I decide to give up on my dream. But lightning strikes! And now I have an issue of Shonen Jump from the future! Teppei Sasaki is a passionate rookie manga artist who dreams of getting a series in Weekly Shonen Jump. One day, he gets a copy of Jump from ten years in the future. Is it all a coincidence, or is it fate? Whatever the case, destiny is about to change... Time warps! Destinies intersected! For a tomorrow that was never meant to be! The future of Jump is here!

Both series deal with mangaka writing series for Shonen Jump. While Time Paradox Ghostwriter does have sci-fi elements in its base story, Bakuman. is more grounded in reality.

A+ student Ichinose Taiyo is the brains of his class. His grades are always high, he's generally liked by his classmates and everyone thinks he will get into a good college then onto a financially well-off career. But his life long dream that no one else, not even his family, knows about is to be a manga author, which realistically speaking has near impossible odds of working out. The reasons why he keeps it a secret is because he'd rather not try if he's more than likely to fail and also because he doesn’t want to end up like his classmate Anezaki Runa. Runa is also aspiring to be a manga author but is obsessed with it to the point where everyone keeps a distance from her because of her anti-social and weird habits. But one day, Runa finds out about Taiyo’s secret and forces him to pursue his dream. Taiyo learns that throughout his life, he has cared too much about public perception which will continue to limit his ability as a manga author unless he opens himself up even if it means rejection. With Runa’s help, he learns to believe in his dream and show his true potential.

Kanna Tezuka is a serious 15-year-old manga artist already being published as a pro. So when she finds out her high school is starting a manga drawing course, even she gets excited. But it's a fiasco! The teacher is useless, and the only other students—three pretty-boy artist wannabes—quickly adopt Kanna as their (unwilling) sensei. But they all have ridiculous delusions about being an artist, and if Kanna can't bring them back down to Earth, she'll never get any work done!