This will be a biased review. I knew from the start that I didn't like love triangles, but I made an exception and read this because it was written by Honey B, the author and artist of one of my favourite webtoons, Flow. "Back to You" sure portrayed real life (minus the time travel) well. It was written so well and realistically that it included people's flaws too. This is why I guess some will like it, some won't. If you can stomach the frustrations, you'll love it. It was a frustrating read, but honestly, I still felt it was well-written. I guess it just felt frustrating because the characters were too realistic -- they had real flaws. I understood that, and I appreciate Honey B for writing the characters so well, but I can't say I enjoyed the miscommunication and relationship mess going on.  I also understood "fate" in the story. But that fate is so frustrating to read!!! The timing, the trauma that causes miscommunication, the miscommunication itself, the unspeakable secrets, the fears, etc. all contributed to one big fat frustration while reading. Honestly, I only continued reading because it was Honey B. Also, I hope the story would also develop more into the investigation of the accidents. The investigation is rarely mentioned in the first season, and it's mostly been focused on romantic relationships and misunderstandings and catharsis and some life lessons about fate. Onto characters: I find Hayoung somewhat likeable. She's a strong and mature person who can really think for herself. A thing I don't like so much: she's 27, so I think she should act a bit more mature than a teen. I get she has flaws, and I know people still have realistic flaws like her even at older ages, but it was still frustrating to read about the miscommunications her fears caused. Actually, she is mature, but just not in the romantic department. And when she does get the courage to confess or communicate... FATEEEEE comes in and ruins the moments. Thank lord fate didn't ruin it in the last chapter of season 1, but seriously, being on the edge of the cliff for 56 chapters did not make me feel good. Frustrations frustrations. Onto Eunjae. I don't get his reasoning where he rejects his first love (SPOILER: not Hayoung) so she will continue on the good life path as he had seen in his first life? What if she has a better life with him? Doesn't he consider that? And then I see him suffering because of his love for her -- which he intentionally took the step to not develop. I know the saying "If you love them let them go" but that only applies when the relationship's failing. His first love likes him, confesses to him multiple times, is even obsessed with him. I don't condone this, but the point is -- he likes her and she likes him.  Okay, when he says he lets her go because he wants her to develop her own sense of self instead of just obsessing about him. I agreed. But then, after she has realised this fact, starts living more for herself, THEN confesses to him, he still rejects her. Frustrations frustrations. Other than that, he's a supportive and encouraging friend (...maybe more in the future?) for Hayoung. Though if he really were supportive, he probably shouldn't have added more misunderstandings between Hayoung and Jaehyun. Now onto Jaehyun. Considering his trauma and his age, I can't fault him much. Yes, the miscommunications suck, but I don't blame him much. He's a nice guy, got nothing bad to say about him. Other characters were quite nice. As for relationship dynamics... Hayoung with Eunjae is my favoured one because they have the same maturity (or at least mental age), are on the same wavelength and in the same boat, have some bantering chemistry going on, and are generally supportive of each other. Hayoung with Jaehyun is alright too because they're quite cute, but I just don't really get why Hayoung liked Jaehyun in the first place. SPOILER: Yes, it's because of a dream about him she had when she was younger. I don't make fun of that reason because I understand that even the smallest things about a person can trigger your feelings for them. But to hold onto it for many years... that's a level I can't comprehend yet. Maybe it's the subconscious trauma of his death that makes it hard for her to get over him? But yeah, doesn't make a great relationship dynamic because it seems more like infatuation or idealization or guilt and regret than love. Sooo I'll infer that Honey B is amazingly good at writing plot, especially great complex ones (Flow was such a treat!), but perhaps not so much with romance -- or at least not satisfying, relatively straightforward romances. But I'll remind you again that I don't like dragged out drama and love polygons so much, which definitely affected my enjoyment of the story and this review. So, give "Back to You" a try and see if ya like it. I've heard good things about Season 2 and the development seems to be more to my taste, plus, it's Honey B, so I'll continue reading it.

Back to You is a realistic time travel manhwa about a a woman who can't move forward and regrets never having gathered the courage to confess to her high school crush, who died in a tragic accident. Hayoung is a now twenty-something who still thinks of her high school crush and wonders ‘What if’ and regrets whatever little time she had with Jaehyun. During a bus ride with a blind date and former schoolmate, Eunjae, the bus gets into an accident, and both Hayoung and Eunjae find themselves transported 10 years in the past.  I really enjoyed reading Back to You. What stood out for me the most were the realistic and flawed characters. You'll even find yourself sympathizing with the antagonists. The story felt mysterious and foreboding and I always felt like something big was gonna happen next.  The art is pretty and I especially love how the sky is drawn. All the characters are drawn unique. Although I sometimes got confused between Hayoung's two friends but that just may be me. I recommend Back to You to anyone who wants to read a dramatic story about well written characters that'll challenge you moral compass.

ok first of all this is gonna be really biased because I LOVE THIS WEBTOON SO MUCH i love the story, i love the characters. i love everything about this webtoon!!!  characters are all realistic and you can emphatize with them easily. this is the other thing that i like. The main theme of the webtoon is to go back to school life and the first love you couldn't reach. this is hayoung's story. From "the girl he only knows" to the girl he cares about. 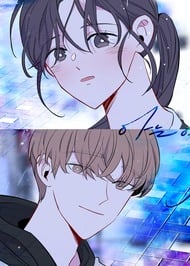