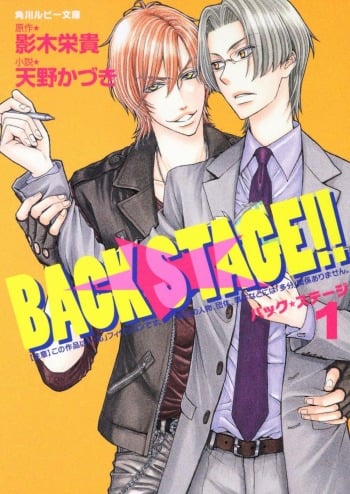 Terrible things happening in succession has college student Sora down, leading him to get lost on his way home. When he tries to find his way back, he accidentally stumbles upon a man gazing at the stars. They chat, and a connection between them starts to form.

Ore to Omae no Stalker Boushihou

After his shift, Chino bought some sweets but saw a guy stalking a women. Turns out the guy is a nice friendly person who did not mean to stalk her since he only wanted to talk. However, after that night the good looking guy keeps on appearing before Chino who. It appears the guy is now stalking Chino to give him sweets after work.

Shusuke has just been reunited with his best friend from high school, Atsushi, after many years apart. The problem for Shusuke is that Atsushi is his secret crush he's been trying so hard to forget about all these years. Will Shusuke take this opportunity to finally reveal his feelings? And just what are Atsushi's feeling for Shusuke?

Sakamoto is a serious and introverted law student. Iida Shoukichi works on a construction site and is always making too much noise. The lives of these two drastically different neighbors are about to collide.

Shishimoto who makes his living as a computer wizard picks up down-on-his-luck Tomosaka and his cat Hana off the street. Shishimoto seems to really have it all together, while Tomosaka can't even hold down a job for any length of time -- but not all is well behind Shishimoto's gruff facade, and over time Tomosaka finds out what's wrong, and comes to care. But then he causes Shishimoto to lose a lot of work by turning the computer off at an inopportune time to save electricity. Shishimoto has to call in his female friend Mika to help, which pushes Tomosaka into confessing his love for Shishimoto. But Shishimoto doesn't react well to his confession...

Handsome Nishino Taiyou is an architecture student, but he can’t finish designing his house. In the shadow of the smile of the cheerful but poor Nanno, the room they share is slowly filling with love. Before long, old wounds from the past seem to be keeping these two from touching each other…?

Kenjou is a beautiful model, but he doesn't like being considered girly. So when he gets into a argument on the street and a stranger stands up for him, he loses his cool. But he also loses his cell phone...

When Sato saw this stranger in the station, he couldnt take his eyes from him. So given the sign, he followed him, and that night also took one of his name cards.But what was the reason that stranger agreed so easily? And how would he react when his one night stand would come to his work place to look for him the morning after?

Pastry chef Ishikawa is the object of affection for fellow employee Hashimoto. However, Hashimoto can't seem to find the courage to confess - and Ishikawa has a problem of his own.

For Enomoto who's currently a college student there was a person he remembered about about at times. It was his childhood friend Shimura, who was always beside him up until six years ago. Due to a sudden transfer he didn’t get to ask the place Shimura was going to and had heard nothing of him ever since. However, he had a reunion with Shimura in college. Enomoto just felt happy at that reunion, but Shimura seemed to hold some other feelings ——.