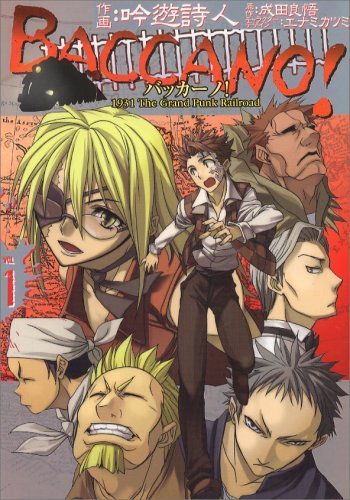 If you're looking for anime similar to Baccano! 1931 The Grand Punk Railroad, you might like these titles.

Lupin III: Legend of the Gold of Babylon

Following a very public chase with Zenigata in New York City, Lupin meets up with an old acquaintance, Rosetta. She tells him that before the Persians destroyed the city of Babylon, a God appeared and hid away all the riches. However before she can tell him more they are disturbed by armed Mafia goons and Rosetta makes her escape, leaving Lupin with an old candelabra. Meanwhile, Marciano, the son of a mafia boss-turned treasure hunter, is also searching for the gold. Now Lupin must not only track down the treasure, but he must also avoid being killed by Marciano’s men - all whilst trying to evade the persistent Zenigata who now has a secret weapon: a team of beautiful female ICPO officers!

The happily-in-love Lupin has left the thieving business for good; but when his significant others racks up three hundred million dollars in debt and leaves him, Lupin finds himself yet again taking up a life of crime to pay it off. When he learns of a job to find the world's largest diamond, the Super Egg; and the world's most powerful computer virus, the Neovirus; Lupin sees the solution to his problems! With the cash from the diamond to settle his debt, and the virus to clear his record, he'll be all set. The only problem is finding them! All that he knows is that the Egg is hidden somewhere in the Statue of Liberty, so Lupin decides to steal that first!