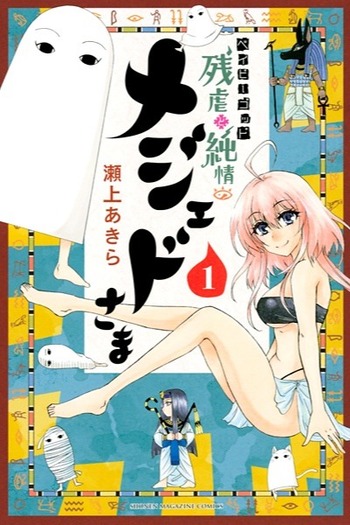 If you're looking for manga similar to Baby God: Zangyaku to Junjou no Medjed-sama, you might like these titles.

What’s a guy supposed to do when his crush is part of club that’s involved with the supernatural but scared to death of the un-explainable?! Meet Ipponsugi Kaede, a normal high school student who has had a crush on Akiyama Momiji since the first day of school. He joins the same club as her; All Purpose Chemistry Club to get closer to her. Sounds pretty normal so far right? Well that’s where the normal ends. As soon as he joins the club, he’s tested by the club’s crazy president, only known as “Boss”, to see if he has any supernatural capabilities in order to become a full member. To top it all off, Kaede is deathly afraid of ghosts. But a couple of tests shouldn’t be much of an obstacle in the pursuit of love, right? Is Kaede’s love for Momiji strong enough to endure all the crazy chaos that seems to happen in this club?

Bad luck follows Haruko wherever she goes, always coming close to killing her but never quite doing it. A mistaken step in front of an oncoming truck leads to her being saved by one of two twin mage brothers. Mages can't let anyone know they exist, but an attempt to wipe Haruko's mind fails. Now she must live with the brothers while they work to remove the twin spells of curse and protection that encircle her. But since she used to live under a bride, maybe that's not so bad?

Ousuke Kuroe is a young man who, upon beginning to live on his own, was kicked out of his one-room apartment on the very day he moved in. Ousuke now finds himself homeless, when a man who is a self-proclaimed realtor pops out from behind him and tells him that he can show Ousuke a cheap property. But Ousuke is in for a shock when he's taken to a luxurious high-rise condominium! And when the bewildered Ousuke opens the door to his apartment, he finds a super handsome blonde-haired guy named Nijio Yuuki inside...?! And one of the conditions for moving in is that he has to live with the handsome guy?! Moreover, the apartment is absurdly cold! Thus begins this comedic and "spirited" tale of living together!

A boy opens a chest at his father's temple, and out pops out a Hanyou, a half demon, half human girl who wishes for nothing more than to avenge the death of her mother and herself. It just so happens that the boy looks just like his ancestor, the one who killed the girl and her mother.

Gichi Gichi kid is a full manga about a boy with magical powers. The same adventures of children with the unique Maruo´s vision and elegant drawings; this kid is always making good for the people; nothing to do with the author's usual works.