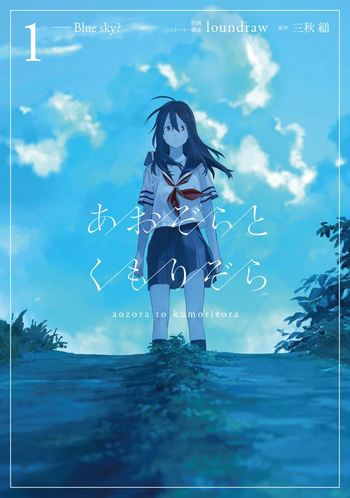 A person who has the power to control people's bodies uses it to make them commit suicide, and one day encounters a special target.

Aozora to Kumorizora (Azure and Claude) is a manga written by Sugaru Miaki, whose previous works include LNs like Three Days of Happiness, Starting Over, Your Story, Parasite in Love etc., the first one being one of my favorite light novels. Being a fan of one of his previous works I decided to check Azure and Claude one out and it's safe to say I wasn't too disappointed, and down below are my thoughts on said manga, judging by all the content we have on it thus far. *** I just want to start of by saying that such a short manga like this can't really be reviewed without entering a bit of spoiler-ish territory. I have made sure to omit any conspicuous or obvious spoiler but there might be some light spoilers up ahead anyways that are needed to be addressed for me to get my point across. Skip to the very end if you just want to know what I think of this manga summarised in a short bit. *** First of all, I think much like his previous works, this doesn't story really translate to manga very well, a light novel could've very much sufficed, but alas. The reason for me to say that is because stories like this manga's and Three Days' work well when you get to relate to the characters more, and I feel like a complete light novel or even just a couple of additional chapters of the same manga would be more successful at that than just a 17 chapter manga. And because because it was made to be a visual novel rather than just a novel, I feel like it suffers the same problem as Three Days' manga adaptation, which is it being rushed with its storytelling. And that brings me to one its gravest problems, the pacing. The pacing is really, and I mean really fast, so much so that at one point (around chapter 13-15, I think) of the series it feels like the story is sort of haphazardly trying to jumble its characters' growths and developments. It wasn't necessarily THAT damaging to my experience while reading it, but it did affect my enjoyment enough for me to grant it as a flaw. I feel like a few more additional chapters would've cut it.  As for the characters, the characters aren't particularly that special or interesting at the start, but after a few more chapters you'd probably tend to like them more, albeit bit of the their, the main two's developments don't feel very subtle and feel kinda on-your-face as they sort of speak out some of the changes they're going through, making everything kind of obvious and not as distinct as it was supposed to be. The main two characters have good connection, though as I said, since the manga is so short it feels really unnatural to me that they'd grow that much of a connection in such a short span. All that being said, I still really liked reading two depressive characters grow to like each other and themselves in a peculiar, dark manner. However, I think the series' greatest strength is its storytelling. The plot is good, much like the author's most other works, your attention could be grabbed from the very first page or chapter. The supernatural elements of it maintain verisimilitude, though I feel like there is one "plot-hole" in the story, and that is the fact that all the cleaners shown in the series automatically resorted to making others commit suicide once they, the cleaners, got hold of their, the others' bodies. They're not cold blooded sociopaths, so what gives? Could it be that their mind is automatically set on the aim to "kill" other people? Could it be that making other's commit suicide with no repercussions is fun in this manga's universe? I do not know, but it sure does feel like a plot-hole. The job of the cleaners is never really explained too much but I feel like that's a good thing, as the job aspect is not the main focus at all, and keeping it a mystery works quite well, much like how the process of selling time, lifespan, health is done wasn't explained at all in Three Days. I can't say for sure where the story so far is going, but the story has reached its very end and I'd have no problem if it were to abruptly end on the 17th chapter (though that really is looking very plausible now, judging by the rate of chapters released). Art-wise it's definitely not the best... not even remotely close, actually. The art feels poor at times and I even had difficulty understanding some of the panels. It's not detailed at all, save for handful of a few panels, and the characters look pretty bland, nor are their emotions conveyed out that much well. I'd say the art is average usually and below average at times. Overall it was a pretty good and enjoyable manga, I'd recommend checking it out as it only has like a few chapters and can be easily speed-read through in a matter of a couple of minutes.  Overall score - 7/10, not a must read but still would recommend. (Note: this is actually my very first manga review so I hope any mistake to be forgiven, and lots of thanks to you if you read the whole thing.)