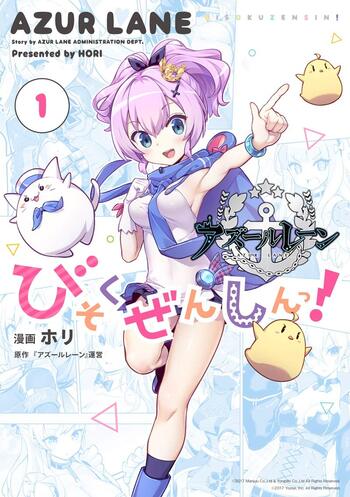 A truly pointless manga, parading a bunch of (theoretically) cute girls. These girls are anthropomorphic ships, though they have very little about themselves that is ship-like.

The first four chapters focus on the core characters--Javelin (the...normie?), Ayanami (the gamer, yes), Laffey (the sleeper), and Z23/Niimi (the teacher). After that, each of these short chapters basically acts as an introduction to a new character, with the core characters acting as through lines. At first, I just thought they were expanding the cast a little bit, but then it just kept going and going and going. New character on top of new character on top of new character. Apparently, this manga's entire purpose is to be nothing but a series of introductions. The girls do laidback and cutesy type activities during these endless introductory chapters. The faces look very similar. There are distinctions in the hairstyles and clothing, but the characters can honestly still be pretty difficult to tell apart. A lot of ecchi. Quite a few of these girl have ridonkulous boobs. I found the first pictures of Minneapolis (ch. 17) and Massachusetts (ch. 61) to be sexy, but other than that I wasn't impressed by any of the attempts at ooh-la-la.