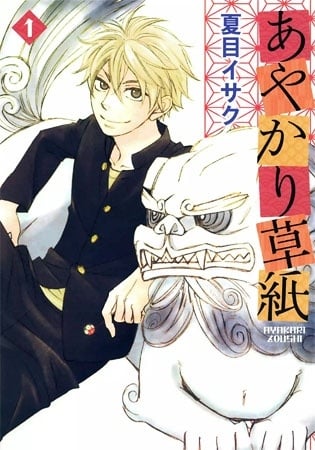 Only days before their high school festival, popular, outgoing big brother Shiro pushes beloved little sister Masago out of the path of a truck. He dies and Masago, average in ever respect in comparison to her brother, blames herself. In fact, she wishes she had died instead of Shiro. At that moment, she becomes possessed by her brother and from that moment on they're two very different personalities in one body!

Something happened to Kobato when he was young, something he can't explain. Since then he's been able to see things that normal people can't see. These are the touching tales of his and others' experiences with the unknown.

This is a manga about the various family members of the Hagami residence. Meet the oldest son Aki, the eldest daughter Hirono, the second daughter Honoka, the parents, the grandparents, the dog Komaru and the cat Poseidon. The first chapter is about Hirono and a peculiar ghost experience.

Vanilla and Chocolat are twin gods of a peaceful tropical island. Short vignettes highlight their everyday lives in the magical setting.

At age 31, office worker Chikage Deguchi feels she missed her chances at love and success. When word gets out that she’s a virgin, Chikage is humiliated and wishes she could return to the time when she was still young and popular. She takes an experimental drug that changes her appearance back to when she was 15. Now Chikage is determined to pursue everything she missed out on all those years ago—including becoming a star!

Hikaru misses her dead brother and speaks to him in her mind as she begins her first day of high school. Here she has many ordinary adventures. She becomes fast friends with a girl named Nene, who lets nothing stand in her way and pushes Hikaru to kiss her new crush, Michiya, who reminds her of her brother. He lets her kiss him, which as it turns out is not a good sign. He seems to be a jerk, whose personality is nothing like Hikaru's brother's. Michiya's best friend Jun warns Hikaru ahead of time. Later, Hikaru finds out the bad side of her new friend Nene. When Hikaru understandably gets upset about this, Nene gets angry at her and tells her to find another friend.

When Momoka, a very shy girl who loves rabbits, is forced to change her seats, she finds herself at sitting at the back of the class, next to a boy she has never spoken to before, Narumi. Everyone thinks that he is strange and all of the girls are afraid of him. Why? There is a rumor that he is cursed and that the girls sitting next to him will never find love. Momoka believes in the rumor and fears him, but she gradually discovers the true Narumi and eventually new feelings are taking a hold on her. Is it friendship or... love?