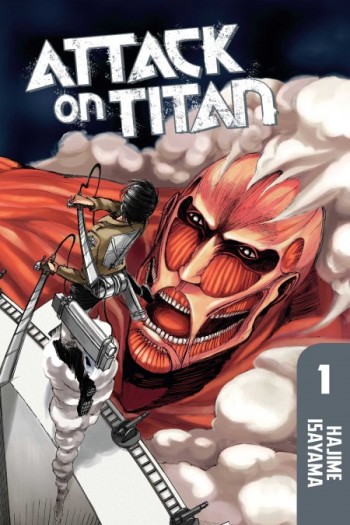 This was tough for me. I technically gave 4.5 for the story prior to the basement reveal, because the surreal world of man-eating Titans bringing humanity to near extinction was original to me, and boy are those Titans nightmare fuel.

So imagine my disappointment when the basement reveal came and everything that made this series great was ruined. It's barely about Titans anymore, just a giant soapbox lecture about "empathy for the enemy". After that, the story shifted towards characters I have no empathy for (Warriors and Marleyans) while portraying the ones I do like (Walldians) in a negative light, eventually ruining what was once one of my all time favorites (Mikasa).

Long story short, Isayama should have stuck to the Titan scenario, it was far more interesting, far more appealing, and far more original than humans vs. humans will ever be.

I’m not going to lie, the only reason I read this is because my best friend loves the anima. Also, it should be noted that I am not a fan of gore, with that being said I will still do my best to be as objective as possible.

Plot: ★★
Set in a world where humanity lives in cities surrounded by enormous walls that protect the humans from gigantic man-eating humanoids referred to as titans.

Okay so the plot summery seems pretty straight, forward right? Well the story itself is complicated. There doesn’t seem to be a rhythm to how things are portrayed and how the story flows for instance, in the first few chapters the main character watches his mom get eaten by a Titian, joins a military unit, gets eaten by a Titian and then turns into a Titian himself. Where other parts of the story you can see one battle scene take up several chapters. The story for me was just really hard to follow, it didn’t help that the world building and lore took forever to get anywhere, which brings me to my next subject…

History/Lore/World Building ★
God awful, yeah I know harsh, but I can’t help it. The last chapter I read was around 100 and the author was just now getting to explaining the history of the Titans and the lore of the world. That’s 100 chapters of pondering why the world is the way it is.

Artwork: ★★★
It’s not the worst I’ve seen nor is it the best. The landscapes and characters felt a little bland, it seems as though the mangata spent most of the time on the Titians, well the main Titian’s anyway. The few main Titian’s were impressive in that they truly gave a menacing feel.

Overall opinion: Waste of time
I honestly don’t get why Attack on Titan is such a big deal, the Manga just didn’t do it for me.

This manga is so dark, a black hole is a beacon of light in comparison. (I read up to #115 as of today)

I would be fine with the author slamming an extinction level asteroid into the planet and being done with it.

The characters I rooted for, can all drop & die for all I care about them. They turned out to be nightmares. There is no main character I care about. This world has no redeeming qualities, so it is not worth saving by this issue, in my opinion.

Look, I like dark horror as much as the next horror fan, but I need someone or something in that world I want to survive. Walking dead gives me Carol and Darrel for that, this manga, gives me nothing to care for in this world.

By the way, I love the anime that has aired so far as slow as it is, just not this manga

The story is great and always makes you want to read on, I recommend reading it in colour as it makes it easier to follow (for me anyway). The characters can either be super complex (E.g. Eren) or only exist for a single purpose and don't really have a personality (Mikasa, no offence intended if you are a Mikasa fan). One of it's best points is that none of them are really typical shounen "Heros", as they all to terrible things to survive. Plus, this will probably end like danganronpa, in which all of your favourite characters die :). I am actually stalling reading this from what has happened lately *cough* chapter 132 *cough*

so the manga did undergo some drastic changes in plot, but it was reasonable in a way that the plot tells how things aren't what they always seem. The only thing I really wasn't a fan of in further developments were the crazy change in character ideals after the 2 or 3 year time skip. For example, Eren unreasonablely has changed and now is against everyone? What? To be honest it was a bit of a shock, as was the crazy plot twist, but it was quite intriguing and more suspence was built in the story than it will ever have if beyond the walls wasn't introduced. All in all, as the franchise is meeting it's end, this original show and concept will remain as one of the most unique and heart pounding shows/manga. Let's just hope it all ends with relatively understandable means. Don't mess things up Isayama.