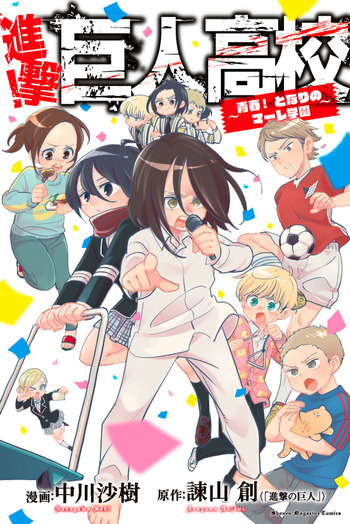 If you're looking for anime similar to Attack on Titan: Junior High - Seishun! Tonari no Marley Gakuen, you might like these titles.

Rock Lee is a youth from the Hidden Leaf Village who strives to become a worthwhile ninja - despite the fact that he is unable to use ninjutsu! Alongside fellow teammates Neji and Tenten, Lee must overcome this obstacle while completing a variety of absurd training routines, protecting the village from the always-scheming Orochimaru, and somehow finding time to win over the heart of his beloved Sakura, who rejects his every advance. However, this matters not to the eternally cheerful and energetic boy, who seems to be undeterred by failure of any sort. Whether competing at the annual sports meet, acting as bodyguard for the Hokage, or battling against his friend and rival Naruto, Lee always gives 110% effort, determined to live out his springtime of youth to the fullest!