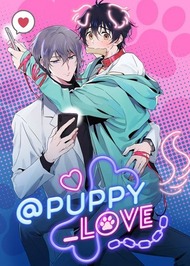 Seoyun is a social media star, soft and cuddly like a puppy, who went viral for his androgynous looks. He’s curled himself up in his little apartment, safely away from the judging eyes of the public. Everything he needs is a click away, except the one thing he wants the most: love. One day, he gets a DM from Yeonwoo, a confident, stunningly handsome medical student, who wants to make Seoyun his little pet, a puppy who needs to be trained. That’s crazy! But why is the thought so… exhilarating?

***SPOILERS*** Yeonwoo and Seoyoon's relationship is honestly borderline abusive and here's why. (If you're into a contract kink, you do you, no one is here to judge) Yeonwoo made a contract that had things stated on the lines of  "Puppy cannot say no" and "If puppy doesn't listen, the relationship can be terminated," meaning Seoyoon did not have the rght to say no and by signing the contract, all consent was given, which is not okay. Just because you are in a relationship does not mean you can't say no. Seoyoon devoted everything to Yeonwoo, he tried his best to make Yeonwoo happy, and Yeonwoo saw him as disposable, even though Yeonwoo knew that Seoyoon was a virgin. It was a first time at love kind of thing with Seoyoon, and Yeonwoo took advantage of that. During a punishment lesson because Seoyoon accidentally messaged Yeonwoo first (which was in the contract), Yeonwoo basically called Seoyoon useless, and this causes Seoyoon to have a painc attack and tell Yeonwoo no and that he does not want to continue on with the lesson. Instead of helping and calming down his sub, Yeonwoo ends the relationship and says that if Seoyoon wants to say no, then the relationship cannot continue which ultimately makes Seoyoon's panic attack worse. The author slides in Yeonwoo's backstory to try and make the readers sympathetic towards Yeonwoo, but I don't think it worked because, to me, it just made it worse. Basically, his backstory is that when he was a kid, he was already sadistic; he liked watching people cry and that was his way of expressing that he liked whomever. There's a scene where he pushed around the guy he liked too much and it didn't work out. This goes on the premise that if he or she hits you, then she or she likes you, and that's not okay to teach readers, especially young readers (I know minors shouldn't be reading this kind of thing, but it's going to happen and there's no way to stop it). Now, yeah, in the end, he makes up for it because he's learned from his mistake and is a lot nicer to Seoyoon, but Seoyoon is just supposed to forgive him because Yeonwoo said he liked him? And you can even see the effects of the abuse coming in because in one of the last scenes, Seoyoon doesn't say no to something that he doesn't like and Yeonwoo has to consult him on the safeword, something that they didn't have in the beginning. Seoyoon doesn't say no because he is still scared of Yeonwoo leaving him again. It's emotionaly abusing.

The hook is seeing a tearful, pouty-eyed boy (the "puppy") being embarrassed and overwhelmed, nigh grovel-y. Fe looks down and holds feir hands together in a demure, submissive way. The plot involves this puppy-boy, Seoyoon, being told to do certain embarrassing things (such as going out without underwear on) by one of feir followers on social media, Yeonwoo, and being given rewards in exchange. Much of the actions involve the risk of being seen, exhibitionistic. One of the problems is that the rewards are all things intended to further satisfy Yeonwoo. So--the lessons are intended to satisfy Yeonwoo and the prizes for complying with those lessons are also intended to satisfy Yeonwoo. It's very much one-sided. What really grinds me is how inexperience is portrayed as the quality that makes submissives attractive. Yeonwoo not only wants a sub, fe wants feir partner to feel off-balance, to not fully know what's going on, to perhaps not even fully know what fe's comfortable with and what's going too far. This is predatory behavior. The last few chapters do end with Yeonwoo legitimately seeking consent and wanting to know Seoyoon's boundaries, but that doesn't make the majority of the manwha any less discomfiting. I also find it very strange how immediately gung-ho Seoyoon is about wanting to comply with all of Yeonwoo's desires. Like, I realize it's explained as fem being desperate from loneliness and low self-esteem, but it still felt like a bit much. The dicks are drawn explicitly. And oddly always seem to be leaking ejaculate.

I'm gonna say this very bluntly: If you don't like BDSM or you're uncomfortable with aspects of pet play, this is NOT the manga for you. Who the hell reads the title, sees the previews of it, and then complains about the BDSM aspect of it; that's silly. That is the main aspect of this story and you'll definitley be uncomfortable at most scenes if you're not expecting it. Anyways, to the specifics. Classic  "there may be some spoilers" warning here. Story: As another commenter said: the smut aspect of this story is much better than the romance. From chapter one you're basically told two things: "Seoyoon is an inexperienced adult (almost a NEET)" and "Yeonwoo is into some weird shit." Yep. At many scenes, I found myself laughing and texting a friend because of how bizarre and unexpected some events in this story are. Seriously, there is some very strange occurences including voyeurism that'll make you chuckle. Let's clear some stuff up, I guess?: Yeonwoo is REALLY into some weird shit. He had this contract that said "[Seoyoon] can't say no to [Yeonwoo]." Again, this is rather common in pet play. Don't show this to people who don't know what abuse is or isn't. The author makes it clear that Yeonwoo was somewhat "bad" from the start and the reader is meant to feel kinda weird about him at first. Don't expect romance at the start. Don't. It's obvious this started off as a "fling" that ended up getting kinda more serious as time progressed. Their first interaction was sexual. A pro(?) is that when Seoyoon says to "stop," Yeonwoo acutally stops. That's not something you see in a lot of BL comics for some reason. Oh, and they're very similar in age - also a huge bonus. There is a storyline that's actually kinda good? Decent, but good. Art: It's good. I like it, personally. Nice artsyle, good coloring, etc. Not much to say about this. Oh, and it's uncensored which is a huge bonus. No lightsabers here. Characters: The characters are kind of unique, I guess? It'd be best to start off with Seoyoon. He's pretty, somewhat of a pushover (although he does set some boundaries and speak his mind at times), and awkward. He's meant to be awkward, though... he's somewhat of a social outcast in real life while he's popular online. Basically, you see him slowly get more confident with himself while the story progresses. He's cute and I love him. Still has uke energy, but also has a personality and life of his own. Next I'll talk about Seoyoon's friend, one of the best characters in this manga without a doubt. I forgot his name but he is also very cute and is an actual good friend for once, a rare thing in the life of most ukes I've seen. His friend is there for him and is able to tell him when something isn't right. Seoyoon is very dense and his friend kinda makes up for it and, although it's a very small thing, you've gotta admit it's a breath of fresh air seeing a healthy friendship. Lastly... Yeonwoo. I don't know where to start off with him. As mentioned above, he's very extreme when it comes to his fantasies and this catches Seoyoon off guard often because he's still very new to it. At first it's obvious Yeonwoo was kind of just using Seoyoon for sex. Their relationship grows over time, but there are definitley parts where you will be cussing this man out. His backstory is somewhat bland... basically, he's sadisitc and was a bully because he was "into it." You'll have to pick up on a lot of subtle cues about his backstory because a lot of what he says is stuff that's "implied." He does have major character development but you'll find yourself facepalming  a lot. He's implied to have flings often, for example -  never stated directly, but very obvious nonetheless. I felt bad for Seoyoon at a lot of parts, honestly. He was lonely and just wanted to be loved but Yeonwoo was initially very cold and only wanted to use him.  Overall... I guess I recommend this to people who are okay or unphased by smutty stuff like this.