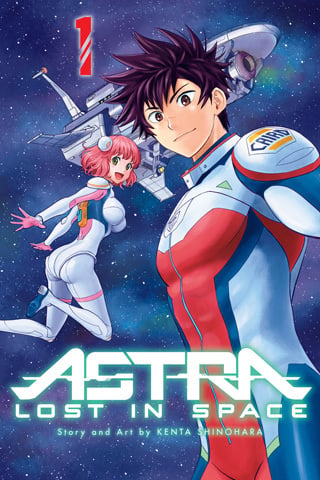 Itʼs the first day of Planet Camp, and Aries Spring couldnʼt be more excited! She, along with eight other strangers, leave for Planet McPa for a weeklong excursion. Soon after they arrive, however, a mysterious orb appears and transports them into the depths of space, where they find an empty floating spaceship…

It can be pretty cool when there are manga publisher sites like Viz Media that can advertise some of their newer series by having chapters on their site free to read. One such series that got my attention would be Astra lost in Space. By the author of Sket Dance, this is a sci-fi epic that got my interest, and these points are why its worth checking out. Story- Aries and other teens her age are about to enter a summer space camp where they get to spend a week on another planet. Talk about a sci-fi fantasy come true. It doesn't long for the situation to go awry, when they end up in space with a floating ship. It doesn't take long to figure out how they're going to get back home. I have to admit, the story had some big bombshell twists for the characters, with the series itself being a slowburner. Art- The character designs for Kanata, Aries and the other characters feel pretty stylized, and their space-suits are sleek and colorful looking too. The author himself has a lot of imagination for the planets the characters visit, as well as the various lifeforms on each planet. Characters- The characters themselves actually get some pretty good development over the course of their space voyage. It is through crisis that we see the other characters open up and we learn more about them, such as with Ulgar and Luca. But I think it was the part with Charce that felt the biggest. All and all, the characters will not disappoint. Overall- I was really impressed impressed with Shinohara-sensei being able to do a different genre after he did his slice of life series Sket Dance. Although Astra did feel a little short for me, I'm happy it didn't get stretched like Naruto or Bleach. The author was able to end the series the way he wanted to and for that I'm glad. So if anyone wants to get into a new short sci-fi manga, I think Astra would fit the bill. Edit) On another note, the Astra series was very funny. Shinohara really knows how to lighten the mood with humor, given his experience with Sket Dance. Fans of Star Trek will love this series!

I received promises that Kanata no Astra would look really good in some volume more forwadly, but in 2 volumes it was unable to present me anything decent to continue, but cliché stuff, and to make matters worse, it is not even a good cliché, but a sickening, discouraging and with many problems. So, what did the manga present? Conveniences, cliché cast, weak dramas and many flaws.In this review I will highlight my disagreements with the work on 3 factors:1- The cast2- The elements of the work3- The course it took at the end of the first volumeDefinitely the biggest problem of all is the cast, after all, the cast is the most stereotyped and cliché thing I've ever seen. Being composed by:- The ambitious male protagonist motivated by some very specific phrase from some tragic drama that he went through in his childhood (besides being quite hardheaded at times);- The cute and innocent girl who just wants to be everyone's friend (kind of stupid, but out of nowhere she takes intelligence from where she doesn't have it);- The girl revolted with everything and everyone, who doesn't want to know anything, only complains and fixes intrigue (tsundere) but soon afterwards redeems herself after suffering the """physical and moral consequences""" of her actions;- The guy who's completely calm with everything, without worrying about anything, but absolutely vague of personality;- The isolated girl, without personality, shy who barely makes a presence in the plot;- The rebel who rebels against all attitudes and arms conflict and is only used for that;- The stripped donkey that is useless for nothing but serving for a comic post that is not funny;- The cute child that should be used for some twist;- And the smart guy who moves the plot while the others are a bunch of clowns, but still, quite boring;In the first volume too, the plot was absolutely cliché over an interesting theme that is space. But it tried to build the power of friendship, exploration, mystery, drama, survival, but it didn't work at any of them at all. Not to mention the great convenience of the work in an event at the end of the first volume, but of course, built in an ineffective way to build a cheap drama to shock the reader.In the second volume, a typical mystery and investigation of an alleged traitor within a group that put them in an unfortunate situation was presented, if this cliché does not even have minimally unique tones or substances (as the work as a whole has not presented since the beginning) and that tends to stretch throughout the manga, i'm done with it, dropped in the second volume.What's good about it? At first the premise in space is interesting, space tends to be intriguing but the way it is presented by the manga ends up not being so cool. The art is also cool, despite very mediocre designs, it is very smooth and pleasant to follow.If you don't have problems with absurdly cliché works and not innovative at all, and you can find fun in Kanata no Astra somehow, go ahead. 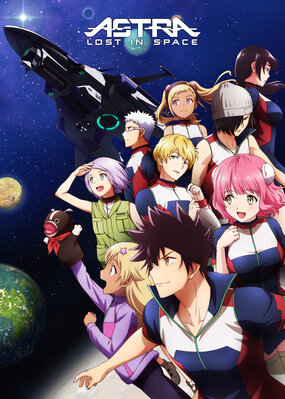