As You Wish, Prince - Reviews 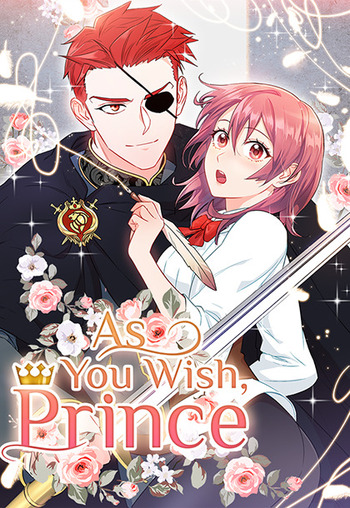 It was funny at first, good action and such. Keep in mind I've read up to 48 chapters so this review is solely about those chapters. First of all, the characters are garbage. They're good in the beginning, but then became idiotic and piss me off. I hate the main character and the majority of the decisions she makes have me slapping my head. This is one manga I had such high expectations for and was let down.

Promising at first, but I think I started to dislike the story after chapter 30 and then kind of forced myself to read more. I was convincing myself it would get better. It didn't. It's also corny, and half the conversation between the FL and the ML makes me cringe. That's all.

While some people haven't really enjoyed this romantic fantasy isekai manhwa, I surprisingly actually enjoyed it. I think the heroine of this series was pretty strong minded and we can see the world that she created in her fantasy novel. The colours and the art man, so so good! Even the blossoming romance between Kyte and Yoonsoo were obviously adorable.

It's too bad that I was only able to read 73 chapters online (definitely support creators on Tappytoon if you want to continue reading the story). However, I think this story was good enough for me to realise it was great anyways and I'm sure the ending will be satisfying enough.

Definitely give it a read if you're into fantasy isekai romance with a strong minded MC and a villian in love!

I really enjoyed the beginning, but later on I started to get really pissed off. I liked the first 20 chapters, but the rest was pretty trash. I didn't like the fact that she made her boobs bigger and she becomes the red hair guys soilder. Cant she just live like a normal person? So far I see no romance between them and I am deciding to drop this manga.

I just finished reading this today so imma review before i completely forget it ٩( 'ω' )و . This contains hella spoilers so dont read unless you're COMPLETELY done with the story im warning ya! also this is hella long bc i dont know how to do short and sweet lol sorry for your eyes

i absolutely love this manhwa and the way the author wrote it. The author made it different from the typical transmigration/isekai stories with the main character Vasser an author getting kidnapped by the main character of her story, Kyte the 3rd prince (red haired dude). Its definitely worth reading because its not like the typical author who got isekai-ed into their novel but theyre like "oh no ive died and isekaied into my novel what will i do?!?l" and thats thanks to kyte kidnapping vasser completely demolishing that cliche.

The entrance of Kyte arriving into the modern time world where Vasser lives was so astonishing it reminded me of the scene from the movied "Enchanted" when the prince comes through a portal and stabs the bus, this was when i read the part about Kyte and the hole he came through to Vasser's world and also when the princess in Enchanted first arrives in new york when Kyte first arrived and theres a clear contrast between how Kyte's dressed in a historical style and his physic and the modern worlds style with its skyscraper-esk buildings it was so awesome i had chills.

I thought it was pretty funny how when Vasser was getting kidnapped by Kyte in her world she cant believe it was her character standing in front of her and thinks its one of her fans cosplaying who's pissed at her for writing Kyte badly. And how when she wakes up in the world of the novel she created she gets right to the point after while and when she realizes the power of the notebook she kinda fucks around and makes her boobs bigger with it power that was hilarious. As well as everyone calling her a witch.

The characters in this series are all so good looking i instantly fell in love with Vasser and Kyte because their personalities are so cool and with Vasser she didnt wanna be a damsel in distress and didnt want to put Kyte in danger if he needed to protect her so she made herself OP and became a strong woman lead character. With Kyte i am just soft when it comes to villians in stories and at first im like oh hes hot i like him but the more i read about his background im like "ohhh shit poor dude everything thats happened to his is so pitiful but this dudes hella cool and has a strong mental fortitude wooahh" and so i crushed on him and vasser the more i learned about them.

Additionally the love is definitely a slow burn with Vasser being a dummy in the beginning and thinking that Kytes gonna like pounce on her or something so she like always blushing around him worried that he might and as she learns more and spends more time with him they both developed romantic feelings for each other. But it takes awhile for them to admit their feelings for wach other and also parat dude trying do a love triangle that was weird but i feel bad for parat because he had no chance so i just pitied the dude for awhile.

I love the twist with Vasser making a mistake with her story so theres a plothole that allowed a minor character to know that theyre just a character in a novel and they went insane because of that and basically wanted revenge on Vasser and how all the "monsters" were created so the story follows the words exacly how vasser had them and distorted because of the minor character, Edward's hate for the author and the fact he couldnt decide what his fate was and the author did. So she had to try to excape back to her world to fix this because her novels world was literally collapsing bc of her mistake.

Overall this was a really good read and its definitely unique to itself and doesnt follow most cliches most transmigration stories do and sometimes the story got stalled and i just wanted to yell at the author and the characters would yall hurry the hell up get to the good stuff but i know that the author of this took a lot of consideration for everything they wrote and the art is so beautiful so thank you author for this.

In my opinion, this wasn't bad, but neither was it amazing. I really think it depends on you and your preferences.

For me personally, I like more character/romance heavy plots rather than dramatic plot twists, and I felt this one had too many turns and not enough romance (there was still lots of romance though). For me, there was just too much happening at the end. The pacing was very rushed towards the end and instead of building up suspense, it just left the ending a bit unsatisfying. It was still a HEA, but just a bit underwhelming.

However, all that I mentioned is not to say that there weren't some good parts of this manhwa! First of all, I really liked the ML. His progression from 'villain' to 'hero' (well hero for us at least) was very believeable and well-done. His motivations were clear and understandable and overall I just really empathised with him! He was so supportive of the FL and respected her decisions which I really appreciated. The FL definitely had her annoying and 'what the heck are you doing' moments, but I loved seeing the 'overpowered FL' trope subtly criticised and made fun of.

I also think the story was quite a creative concept (for an isekai at least) such as her being able to change her abilities through her notebook (although the rules of that were quite dumb). I also enjoyed the secondary romance between the second prince and female commander.

This manhwa had all the cliches: the devious blond female villain, the love triangle (argh I definitely got second-lead syndrome...) the awesome wingwoman maid, and the manipulative mother. But, don't be swayed by reviews! As I always say, give it a go yourself!