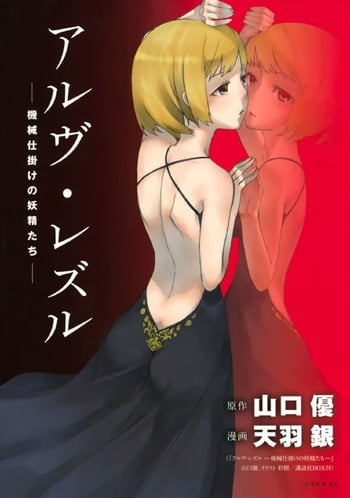 If you're looking for manga similar to Arve Rezzle: Kikaijikake no Yousei-tachi, you might like these titles.

Tinos is the farthest colony planet from Earth. There lives a generation of people who have corrupted the dreams of the founders from 300 years ago. However, a new man will change it all...

Shortly after beginning a new life for himself as a private investigator, former police officer Goku loses his right eye in a freak accident and, through the aid of a secret benefactor, receives a cybernetic implant as a replacement.

Crimes commited using manned combat-androids dubbed "Katana" run rampant. In an effort to maintain order, the government has organized the AKCD - "Anti Katana Crime Division." Togusa of the 8th squad of the AKCD, while holding existential doubts as a Human-Katana hybrid, continually casts himself into battle...

This story takes place on the frigid, massive artificial planet known as Aposimz. Eo, Biko and Etherow, residents of the White Diamond Beam, are in the middle of combat training when suddenly a girl appears, Rebedoan Empire soldiers in hot pursuit. The girl asks for their help in keeping safe a “code” and seven mysterious “bullets.” This chance encounter marks a major shift in the fate of the entire planet...

As detective Musubi Susono investigates a series of child kidnappings, her own partner is viciously murdered. But when the investigation takes a brutal turn, she is suddenly confronted by the killer - and his vicious Silicon Creature! Can Susono possibly fight back against these superhuman odds?

Natsume Tomoharu takes the opportunity to live on his own when he enters high school. Although he appears to be a normal high school student at first glance, there is one thing about him which isn't normal. He's haunted by the ghost of a young girl, Minakami Misao. Tomoharu moves to his new place of residence, Meioutei, and starts enjoying a carefree high school life. But this is all ruined when a beautiful girl named Kurosaki Shuri appears with a trunk which Tomoharu's brother told her to pass on to Tomoharu. The presence of the trunk causes the appearance of Takatsuki Kanade, a girl dressed like a shrine maiden who is after the trunk.