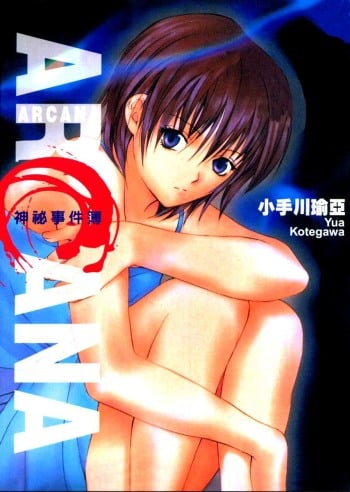 Yuri is a troubled young man who, for his own reasons, killed his mother. Anna is a mysterious young woman who helps Yuri bury the evidence on the terms that he helps her kill her own parents; and Mitsuba is another teen whose life has also been marred by horrific violence. Together, the three have begun a new life where killing is commonplace and revenge is the ultimate goal. However, there’s more to their relationship than meets the eye, as the three share a disturbing past...

Anne Freaks and Arcana Soul both have stories that explore the dark side of human nature. Though their means of doing so are different. Anne Freaks delves into the world of an underground cult whereas Arcana Soul uses a supernatural approach. Both means are effective and the stories similar enough that liking one would probably mean enjoying the other.

Hikari to Yami no Logic

Sakura Kazuki is a telepath who can sense negative emotions such as malice through contact. Despite his cute 17-year-old appearance, he’s in fact a 26-year-old rookie detective in the police force, Division One. Teamed with his seasoned, assertive partner/mentor, Shido-san, Sakura often works undercover. His disguises consist of a high school boy, an office lady, and he even gets to wear a cat suit!? Cosplay (costume play) in the police force!?

In this compelling story from international bestselling manga creator Sanami Matoh, a detective becomes involved with a mysterious young boy who has with telekinetic powers and his violent sister.

The story is about a Detective named Akiba who crosses paths with a High School Idol named Mizuho. He was assigned to protect her. But he's also a young detective and a bit unorthodox. For the first two volumes Mizuho ends up getting involved in Akiba's other cases but eventually it progresses into a friendship (and eventually a relationship??).

Koh Fujimura's world is turned upside down when he’s involved in a car accident that leaves his eyes seriously injured. He regains his eyesight after surgery, but also seems to have gained an ability to sense strange apparitions around him … Meanwhile, a serial killer with a disturbing fondness for eyeballs is on the loose in Tokyo, with a band of intriguing beauties in hot pursuit!

SEVEN-O agents’ work is all about controlling illegal operations related to a drug called Anthem. They operete under the “double decker system”, and this how the veteran Doug Billingham and the novice Kirill Vrubel ended up working together.

On her first day as a police academy trainee, Haruna is assigned to keep an eye on Ishikawa Ango, a driven and resourceful detective who has recently survived a gunshot wound to the head. What Haruna doesn't know is that the incident has given Ishikawa the ability to see and communicate with spirits of the victims, making him even more determined to use his special ability to catch culprits.

Possessing extraordinary detective skills and even helping out at the police department can't be normal, and anyone who knows Uryuu Nanao knows that she's different from the rest. It is this distinctiveness that draws both Karasuma Nozomi and Sakuragawa Nozomi to her despite Nanao's attempts to distance herself from them both. However, a series of murders take place and Nanao is forced to enlist their help in order to unravel the truth behind her father's murder. Just who is the real mastermind behind the ongoing murders and why are they targeting Nanao? And what is the secret left behind by Nanao's father?

Residents of a sprawling apartment complex are gripped by terror as dozens of tenants commit suicide over several months. The police are baffled. What no one realizes is that a malicious psychic force has gained control over the complex, and it isn't until a young girl moves in with her family, a girl gifted with her own psychic arsenal, that the source of the chaos is finally revealed...