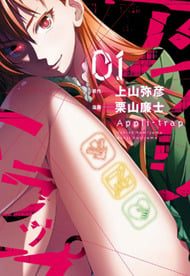 In an experimental school in Japan students are instructed to download a mobile app named TROIA designed to improve their education, enhance their interpersonal skills and encourage social activities by completing 'Quests' that are randomly sent to each student. Sounds like a bit of fun but there is a catch, the bottom ranking student each week gets expelled and soon students find out that the 'Quests' are not as innocent as they appear nor strictly bound by rules. Friendship, trust, respect, knowledge, skills, every student will be tested to their limit as failure is not an option!

Super entertaining. *** Minor Spoilers *** Fair warning, although the manga seems to be missing the tags here, this manga is a form of high-stakes games and involves dying. You probably wouldn't have figured that out from the tags or the description, but now you know. Tons of backstabbing, drama, scheming, and people being two-faced. And although it's not a generally violent manga in nature, there are a few panels here and there that are graphically disturbing. It's not a read for the faint of heart.  If you enjoy dark stories, crazy faces, sadism, and revenge plots, this might be the thing for you.

A surprisingly short tale of mind-games, betrayal, and murder. While it's a bit too edgy for my tastes overall, ultimately the only part I'm truly disappointed in is just how short it was. It felt like it was building to a much grander story, but simply ended on a very minor climax within that grander arc. Story - In a similar vein to others of this genre like Deadtube, the students of a random school are suddenly beset by an exciting opportunity that's too good to pass up, but quickly turns sour as everyone realizes that the best way to play the system is to lie, cheat, and frame your 'friends'. In this one, it's a "Quest" app that gives students supposedly random objectives to complete while on campus for extra points. We follow our MC, who's a little too smart/observant for his own good since he has no tact when it comes to social interactions, as he finds out exactly how sinister this questing app is at making people harm and betray each other to avoid being the Lowest Rank. It's got all of the trappings of your sterotypical big-brain MC story where the only time anything bad happens is because "he's just too smart" and says something at the wrong time, and it does a decent job of fulfilling that trope. My biggest complaint about this isn't even that it's a dark/edgy school story (that would be shut down after a single day if any of the students had anything resembling parents or the ability to call police), it's simply that it sets up a very grim background character and a sequence of relationships that are clearly building to a much larger story than what we ended up getting. 5/10; Needs to be longer and actually finish the story it started. Art - While not spectacular, there's nothing to complain about here. It's clean and clearly depicts the situation without any fuss or confusing panels. I feel bad not being able to point out any particularly good aspects, because it's definitely above-average, but nothing specific sticks out to me. 7/10; Pleasantly above par. Characters - I'm not much of a fan of these kinds of characters, as it can often be hard to tell what parts of them are genuine and what parts are just a front they put up for the whole backstabby theme. Sometimes a character does a complete 180 on their personality, and it can be hard to judge if it properly suits the character and is an example of good character writing, or if it's a character break just to suit the story. In any case, the characters here are certainly not bad, but I feel like they could be much better if the story were allowed more time to develop them. 6/10; Needs more time in the proverbial oven Overall - The work as a whole just feels slightly rushed, and ends abruptly, which is unfortunate because I feel it deserves a much better shot than what it got. I *want* to give it a higher score, but I can't without being able to experience the rest of the story that was hinted at. 6/10; A promising premise that was not given enough room to develop.