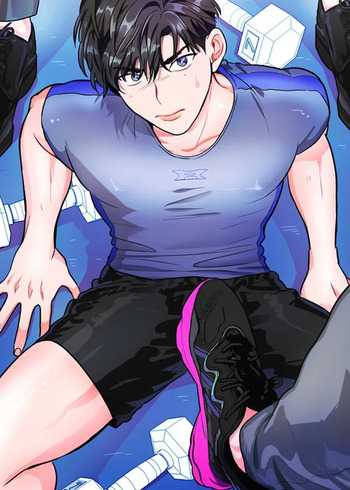 There's a lot of similarities. Both take place in the film industry, but Anti P.T. is a lot steamier than Star x Fanboy, which is more cutesy. But I'm sure you'll enjoy it nonetheless.

Studying abroad in the US, Dojin has experienced his fair share of unexpected surprises. New schools, new people, new roommates. However, of all the surprises, Dojin never expected to catch his roommate’s handsome younger brother, Taehee, jerking off to him in his sleep?! That’s when the scandal began…

Put a Smile On

For Lee Kang, the captain of the swim team, life is a constant power struggle. And whether it's in sports, or in bed - he always wins. But when Junho from the baseball team accidentally witnesses him having sex with the TA, Kang finds his unyielding new opponent. Will Junho get destroyed just like the others, or will he remain standing with a defiant look in his eyes?

Both manga have very similar features.

I'm bad at writing reasons out, but they remind me of eachother and I feel that most people would like Put a Smile On if they enjoyed ANTI P.T and would also enjoy ANTI P.T if they liked Put a Smile On.

May Belongs to Me

Without a stable job or home, Joo May lives recklessly, drifting from one lover's house to another. One day, May passes out, almost beaten to death by an ex-boyfriend he bumped into. When he wakes, he finds himself chained up in the house of Shin Jooin, the clean-cut man who apparently rescued him. But there's something off about Jooin, who treats May almost like a pet* Who is Jooin really, and what is he hiding?

Choi Moonhyuk used to be a fighter for an illegal club. He will do anything to protect his brothers. On the day of his supposed 15th consecutive win, he ends up losing and is sold to Daebuho's son, Seo Yeonjin. In accordance to the shameless Yeonjin's plans, Moonhyuk ends up being his mad dog and winds up under his leash.

Dick Maximilian came to Seoul with big dreams and a strong, jacked body to match. Ben Dover is a sweet and innocent young man, confused about his body's reaction to incredibly handsome and muscular men. He soon discovers his match at the men's bathhouse, where his wet, tight end is on display, luring in the equally naïve Dick. These sexy boys soon discover the pure joy and treat of man-meat in a steamy bathhouse with all the hot men pooling together for a wild, sweat-soaked sex ride!

A Man of Virtue - Specials