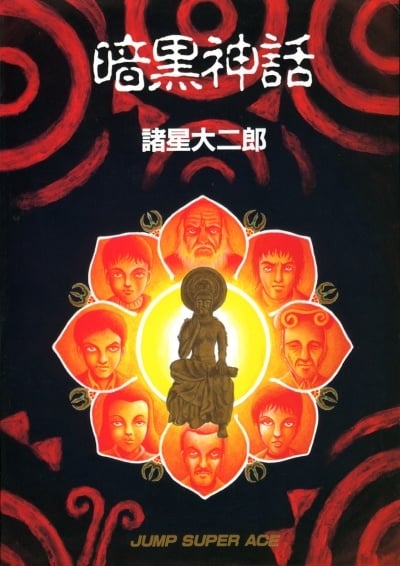 The current age is a lawless one. A world without enlightment, a world without healing - only suffering. However, there is still a way that the living can be saved. The curtain rises on a supernatural, heretical battle. Bishoujo Bodhisattva Miroku-chan will save the world through pop.

Set in a world where nine people known as the "Kuyo" can summon the power of Buddha to become the strongest people in the world to fight evil. Akira and Sakuya, former Kuyo who lost their powers, live a life of regret. But when a threat arises, they stand up to fight for what is important to them. Now they must find a way to reclaim the power of Buddha, and stand against Vishuddha, which is searching for a hibutsu (hidden Buddhist image) in order to destroy the world.

Kujaku is a young Ajari, a monk with the power to destroy all evil and a pure heart of mercy,who has inherited the name of the Peacock Lord. With the powers of his esoteric buddhism, he travels the land destroying evil monsters, demons, and ghosts! His adventure begins when a monster appears at a TV station, but upon a closer look, Kujaku finds a powerful grudge from a weak victim who was exploited by the TV station in order to increase ratings.As the story goes on, Kujaku awakens more and more to his godlike powers and does battle with creatures from legends all over the world!

The story is about a buddha with the 1,000 arms armor. Sennju, an emissary of the buddha Kannon, appears in the human world to find and protect the reincarnation of the buddha Mirokou. The emissary arrives on Earth just in time to save a young girl from being bullied by some rough looking men. Just who is this girl and will she believe that he's a buddha who was sent by Kannon?

Religious monks adapted to modern technology and weaponry to combat the threat of demons. Ryuudaiji, a monk who's on a journey to locate and purge a demon spirit, that is terrorizing a forest which was notorious to be a place where people commit suicide, meets a wolf boy, Tamaki Madoka, and his wolf companion. Things starts to develop between the two after an encounter with a tree demon spirit as Tamaki decides to go to the outside world to learn more about his past.

The time is several millennia ago; the place is India. Droughts and famine plague the country, and its people are forced into a strict caste system that rewards only the elite cream of the crop. Across the land animals and Brahmin alike rejoice, for the blessed child with a birthright to become a god is about to be born. His name is Siddhartha Gautama, later to be known as the Buddha. However, Siddhartha's life will not be an easy one. He will experience love and loss, learn about the value of life and influence the lives of many, including Tatta and Pariah, Bandaka the bandit and countless others.

There once was an ayakashi called Karma who challenged his victims to a battle of wits. If the subject succeeded, the ayakashi would grant them one wish, but if they lost, he would devour their soul. At the same time, there was a young monk called Hanasaku Ikkyuu, who was famed for his cleverness. He used to eagerly sharpen his mind, solving challenging riddles sent to him, until his mother fell ill. When he found that his cleverness was of no use in helping her, he gave it up. Karma seeks out Ikkyuu, eager to best him in a battle of wits and consume his soul. One day, Ikkyuu rescued a young beggar boy, only to see him fall ill with a mysterious illness. That same day, Karma finally finds Ikkyuu and offers him his dangerous bargain. Thanks to Karma, will Ikkyuu finally have a way to use his cleverness to help the people around him?

Issei Yotsuya inherits an old camera from his great-grandfather. While out trying it out, he accidentally drops it from a bridge. Looking down he is shocked to find it has hit a young girl wearing a kimono and hakama on the head. He quickly takes the unconscious girl home, but when she awakes, it seems she has lost her memory. But then Issei discovers a 80-year-old photograph featuring the very same girl in his apartment...