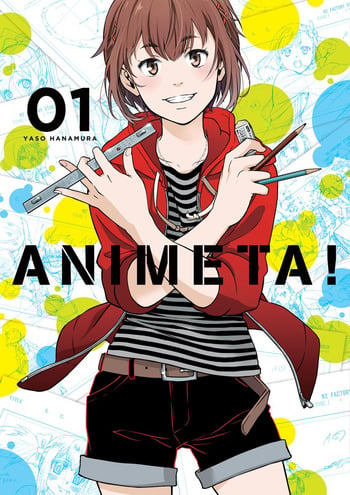 It’s two months into Ranmaru’s college career, and if he’s learned one thing, it’s that he’s really uncomfortable around other people. But when he stumbles into a zombie mob attack, he’s forced out of his comfort zone in the most dramatic way possible! Of course it’s just a movie shoot, but when he wakes up from his ignoble faint, he’s been whisked away behind the scenes with the Art Squad! Could this group of weirdoes be what Ranmaru’s been looking for all his life?!

Both manga deal with the art happening behind what is seen and appriciated by the general public. While Animeta! follows animators and Behind the Scenes! follows costumes and set design behind films, they both give you a lot of desciption and terms.

Behind the Scenes! is more episodic with many characters that one follows as they do different assignments given to their club. Everyone in it is extremely talented at what they do.

Animeta! is more serial as you follow one girl's dream to become an animator after watching and falling in love with anime. However she is very far behind the others around her, knowing literally nothing.

Kaede Hashimoto is a young woman who wins the rookie screenwriter prize with her debut work on a smash-hit theatrical anime film. Kaede moves to Tokyo to pursue her dreams, but the reality of making a living as a screenwriter is much harsher than she anticipated. She finds more work doing part-time jobs than writing, but her luck begins to change when she gets a very important phone call...

Ichino Fukuyama and her fraternal twin brother Nita are animators! Once they graduated from high school, they followed their dreams to Tokyo and joined the Memochi Pro anime company! They refused to let the warnings of their parents and friends keep them from accomplishing their goals. However, it turns out that being an animator is actually a difficult dream to accomplish, with lots of job pressure, deadlines, low-pay, and no job security. On top of that, Ichino discovers that many of the other female workers don't even like to watch anime, and are embarrassed to be caught even talking about it. Ichino and Nita continue to give it their all, and stretch their meager paychecks as far as possible, all to accomplish their dreams of becoming successful animators!

Okiguchi Hiroyuki is an animator who is doing something he truly enjoys - drawing key animation frames for animes. Then right before the deadline for another set of key frames, a new blonde-bomb-shell production assistant comes to pick up his work. But is that all she intends to take from our protagonist?

This Is It! Seisaku Shinkou Shinonome Jirou

Shinonome starts a new job as a Production Assistant at the anime studio "Is This It?". With no knowledge of the subject he falls behind his coworkers from the first day on. Will he find his "goal" and get into the demanding job? On top of that he has to deal with his neighbor who mistakes him for a molester after an unfortunate incident.

Ever since she was in fifth grade, Otome Yamada has longed to be a heroine in a play. This led her to join the drama club upon entering high school, but because of her unusual, anime-sounding voice, she has only ever been a stagehand. Undeterred, she tries to go to an audition for a play, but accidentally ends up at a recording studio for an anime series. Although she gets thrown out after unknowingly getting in the way of the recording, a talent agent impressed by her performance offers her a job as a voice actress. Spurred on by her dream, she eventually accepts the offer, leading her to working with the popular voice actress Suzu Ayase.

Japanese animation—the globally acclaimed, family-friendly theatrical features are the exception rather than the rule for a TV-oriented industry that has been pushed into late-night slots in an era of fragmented audiences. When only three titles among fifty might turn a profit, topping the charts is hardly an overambitious aim. Yet as three women, a producer, a director, and an animator, survive in a business infamous for its murderous schedules, demoralizing compromises, and incorrigible men, moments of uplift emerge against all odds—and how.

23-year-old OL Tsukahara Sawako has a sober social life. She was assigned to the General Administration Section 2 (Shomu ni, or GA-2) which is considered the dump of the company under the senior OL Chinatsu Tsuboi. The story follows their boring yet quirky work lives.