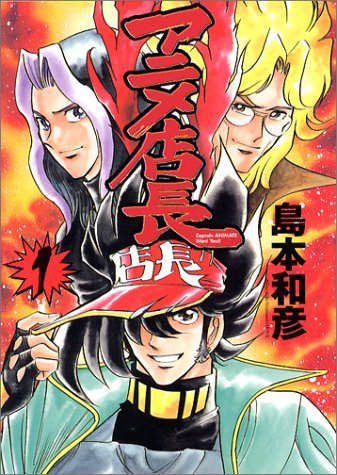 Ken Kubo is a normal man with a normal job who is besotted in a normal way with a female friend. But life turns distinctly abnormal when he meets an otaku, Tanaka, and is indoctrinated into the obscure world of anime, model guns, and garage kits. As Kubo finds himself shunned by those he cares about, he becomes only more determined to evolve into the ultimate being - the Otakuking! But Kubo is not the only one coming to terms with society. While he strives to mould the world into a perfect haven for people like him, otaku all across Japan are laying bare their strange, lonely lives for the first time… and it’s not a pretty sight.

With no other idol work available, Komugi finds herself working in a cosplay cafe with many other actresses represented by her management agency. Unfortunately, this also means Akiba is under the same roof, and the two spend their time bickering about breast size – much to the male patrons' delight! Meanwhile, Kyousuke is in the vicinity to showcase his new series and Komugi is determined to slip out and catch a glimpse of the heartthrob, causing no end of trouble for her manager. Will she finally be able to confess her true feelings to Kyousuke, or is she destined to carry a serving tray for the rest of her life?

It has been three months since the completion of Time's Journey 2, and Kuromi and her staff have new challenges on the horizon: THREE shows to prepare! With morale at an all-time low and the frames not coming in, Takashimadaira, a veteran producer (and a bit of a slave driver) is called to the scene for the emergency at hand. Can the crew pull it together under the stress of their newfound leader's supervision, or are the new series simply destined to fail? Failure is not an option with Kuromi on the job!

Based off the hit game comes a new series about the danger lurking in the Otaku heaven of Akihabara. Vampires with an ability to take over anyone they bite seek their prey  in this anime fan’s paradise. When Tamotsu Denkigai encounters one, he nearly loses his life until the mysterious Matome Mayonaka revives him! Now part vampire, he forms a group to protect the streets of Akiba. fighting to keep the streets safe.