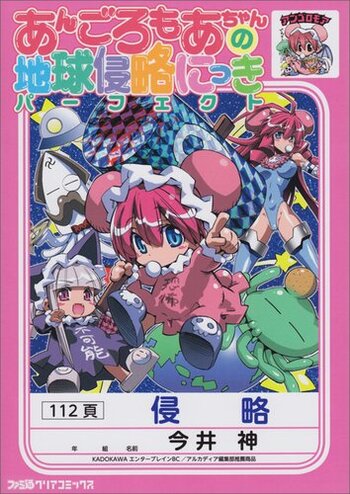 If you're looking for manga similar to Angoromoa-chan no Chikyuu Shinryaku Nikki, you might like these titles.

Correspondence from the End of the Universe

Marko is a young Russian university student who is looking forward to finishing school so he can spend more time with his fiancée. However, those plans go out the window when he’s abducted by aliens! These extraterrestrials have a mission for Marko, one that will take ten years. All Marko can do is make the most of it and get to know the strange creatures who are now his co-workers in this offbeat tale of a life far from Earth.

High school girls suddenly begin falling from the sky over Tokyo, attacking and converting anyone nearby into high school girls. They survive all forms of attack and without a means to fight back the human population is steadily decreasing. Who's left to help save Tokyo?

Meet Armand Jones, a typical boy from small town U.S.A. Doesn't like his teachers. Doesn't like homework. Can't stand the bullies constantly harassing him on the bus every day. But what he really won't like is getting ZAPT! Armand is about to be inducted into the ranks of the Pan-Galactic Order Of Police, where, like it or not, he'll have to save Alien Races and outwit marauding Space Pirates! And he'll still have to be home in time for dinner. Being a kid is about to get a lot harder!

Among the humans who walk the earth, also exist many aliens. The vast array of aliens can use abilities like telepathy, spells, and will even blow up whole planets! Perhaps that’s why they look down on us humans, but one thing is for sure, they love drinking just as much as we do! What appears to be just a friendly drinking party between young male and female aliens is actually not as innocent as it seems. What exactly will unfold by the end of the night?

In a very common high-rise apartment building, suddenly a mysterious girl appears at someone's balcony! What is she trying to do?

On his way back to his home planet, Pokomuu, the spaceship breaks down and Mumurin tries to take off in an emergency. He ends up in the room of Kota, a Japanese elementary school student.