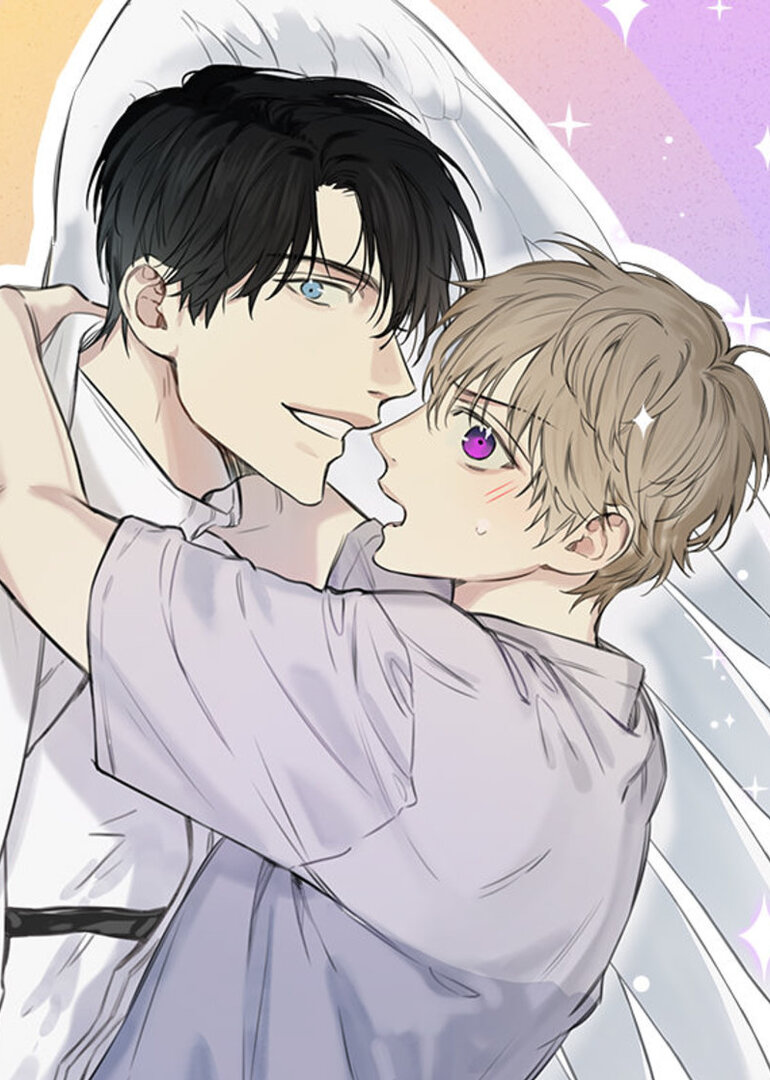 Ashley was hanging between life and death when she was unexpectedly visited by an angel... What will happen to her now that she is living with an angel?!

The Essence of Love

Kira Kira has been made fun of all his life due to his name which loosely translates as sparkly sparkles. On top of that, his rich parents have been giving him money indiscriminately, and most of his "friends" only hang out with him for financial reasons. Then, one day, his friend gets crushed by a pillar, and a mysterious winged creature chases him down! The angel-like guy introduces himself as a celestial guide and he begs Kira to teach him how to be scum like him! And that's just the beginning of their unlikely romance!

How to Use an Angel

A bunch of thugs holding a demonic invocation have kidnapped Kiom to use as their sacrificial offering. Just as she’s about to be attacked, though, the wall before her crumbles, giving way to a tall, glowing figure. The newcomer is more handsome than anyone could dream of, so pretty-faced that he seems angelic, in fact. Kiom is relieved to be rescued, but the guy seems to have mistaken her for someone else. He calls her by a strange name, and pulls out a…sword?! Will Kiom get out of this alive?

With rapid developments to the human civilization, the need for God and his angels have decreased at a significant rate. Thus, the angels are experiencing a historic unemployment crisis! With this problem in hand, God decides to start a company that will reduce the unemployment rate in both Heaven and Hell. He hereby founds the company, H&H Roman Company!

God has run away? The world is in chaos? Michael goes to the human world to look for an old friend, and save the world together, but the reincarnated Lucifer can no longer remember him…… And the reason turned out to be because Michael himself sealed his memories and powers away! To awaken him now……he must #%￥#……forget it, even if he has to cry and grovel, he will bury the pit that he dug himself!

Kaie is just another demon trying to rise up in the ranks of demon society by working in the human world. Unfortunately, he's got one major thing going against him: his body, which looks like a man's but is actually hermaphroditic! Luckily for him it isn't permanent, and Kaie (with every intention of becoming a splendid man) has waited his entire life for the day when his sex would be decided one way or another. But his plans hit a roadblock when he unwillingly gains the affections of Daina, the heir to the Celestial throne who happens to suffer from an unusual condition that alters his appearance depending on the time of day. Will Kaie's dreams of becoming a real man fade when the charming angelic heir is so insistent on making Kaie his wife?

Vampires are never to be allowed to love a human because they will turn into dust. Half-vampire Kazuki has known this since the day his mother died. Picked up by vampire Touya, Kazuki really hates him and wishes to break free. But Touya has many uses for Kazuki.

Eiji and Kouki are angels whose mission is to guide souls to either heaven or hell. Eiji, a black angel, guides corrupted souls to hell, while Kouki, a white angel, guides pure souls to heaven. Both have to work together as partners to accomplish their task. However, God cannot forgive black angels for their accumulated sins, and only gives white angels the power to reincarnate. Though Eiji develops strong feelings for Kouki, can he escape the cruel fate that God has given him?