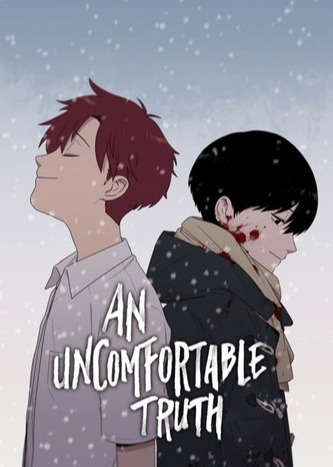 If you liked An Uncomfortable Truth or Save Me, you'll like the other because:

Both is litle creepy but really good and interesting. If you like little horror then these is perfect to you.

Both the manhwas are similar with the themes of psychological problems and over - obsession of brother..

The ending of save me is really good..but an uncomfortable truth has a heart breaking ending..

Overall both of them are really great

These are great reads if you like a psychological story that delves into the mind of a killer. The main characters of both have similar backgrounds, and their stories play out in a similar way. If you like sitting on the edge of your seat and slowly dying why you wait for more answers, you will love both.

Both are wonderfully crafted horror thrillers that show progression in the minds of serial killers. Fucking terrifying.

the style that both of them are drawn in is really similar as are both of the antagonists.

Both are dark suspenseful manhwa that follow a MC who is living with a mentally unstable person of their family.

Both are psycological and deal characters in their highschool years involved in murder due to the influence of trauma. I found Bastard to be more of a psycological thriller than An Uncomfortable truth, although they both still fit that category well.

Blood on the Tracks

Seiichi Osabe is just a normal if not insular 14-year-old boy with a beautiful, loving mother and a hardworking father. The bond between him and his mother is iron-clad, but when an accident involving his cousin sows the seeds of doubt in his head, Seiichi begins to question whether his mother's doting nature is normal, or something more sinister and abnormal. Where do you draw the line between motherly love and unhealthy adoration? And how can you tell where that line is when your mother's love is all you've ever known?

Danzi, 31, has been living alone now for around 10 months when a sudden call from her mother brings back memories of why she moved out in the first place. In her eponymous comic, Danzi uses her personal diaries to recount her experience growing up with two brothers and emotionally abusive parents. An instant hit in South Korea, this comic confronts issues such as sexism and domestic violence in a way that’s inviting, albeit heartbreaking.

Mizuki really isn't a bad person. However she understands that she is one of the haves. And even if she only has so a strand to hold on to, that's much more than the introverts or the socially inept. On the day of the field trip, Mizuki's position with the cool kids cannot be better. But now a good portion of her class are now firmly against her. While this "lower" clique may not be united, their hatred is much stronger than their differences. Unfortunately tragedy strikes in the form of a traffic accident. And now the class is split into two new groups...the living and the dead! Almost the entire class has been wiped out and the five remaining girls are injured and lost in the wilderness. They also hate each other, and in a mix of Lord of the Flies with Heathers these girls begin to assert their wills against each other to try to survive while enacting a new class structure where looks and style is no longer the definition of influence.

A reclusive high school student is suddenly forced to leave his home due to an unexpected turn of events.