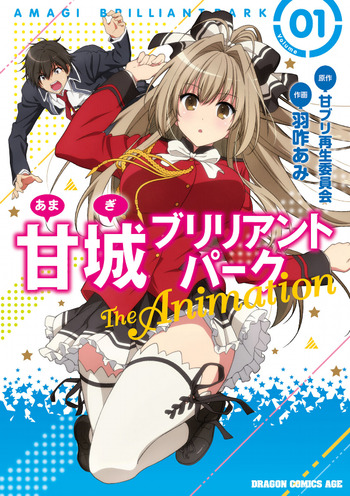 If you're looking for manga similar to Amagi Brilliant Park: The Animation, you might like these titles.

The Pillars suddenly appeared above Earth, threatening all life. A god who called himself Odin came to the aid of humanity as it was driven to near complete defeat. To counter the Pillars, Odin declared a counterattack by bequeathing humanity with the battle maidens Walküres and the "herocraft" as their wings. Several years later, the battle between humanity and Pillars rages on, with men supporting the Walküres as they soar through the treacherous skies to save the world.

Humanity is under siege. Strange, hostile beings known only as pillars are stripping away the very life force of the Earth, turning vast tracts of the planet into barren wasteland. The only ones who can stand in their way are the Valkyries, the chosen of Odin himself who fight with his blessing in divine machines that arc gracefully through the air, leading the countercharge of the human race. Even with their support, the fighting is desperate, and hope is hard to come by on the European front. Rusalka is determined to do everything she can to change that as one of the chosen warriors tasked with retaking the skies and bringing humanity back from the brink of extinction!

Fushigi no Kuni no Namihei-san

Protagonist Kurumi Namihei, who always dreamed about working at Tokyo Dream Land, ends up getting a job at an amusement park far away in the countryside.

People have created many stories. Joy, sadness, anger, deep emotion. Stories stir up emotion and captivate. However, those emotions are nothing more than the feelings of a spectator. What if the characters in the stories had their own will. In their eyes, are we, the creators of the stories, like gods? Revolution for our world. Punishment for the land of the gods. Re:CREATORS. Everyone becomes a Creator.

A half-human, half-vampire girl named Miyu is trapped in a body that will remain a teenager forever. As a vampire, it is her duty to hunt down demonic beings known as Shinma who have wandered into the human world and send them back to the Darkness. The new story begins with Miyu transferring to a certain middle school.

Iede Shounen to Natsu no Yoru