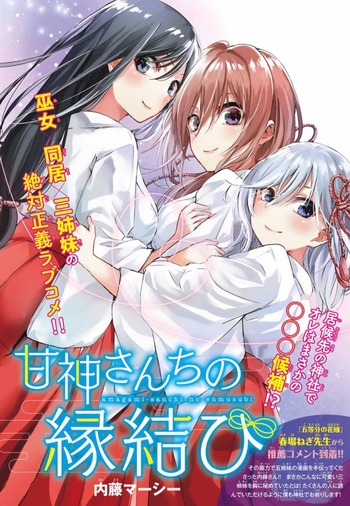 This was boring, plain and simple. I don't think it's deserving of the serialization which it received. The personalities of the girls are a standard range--a coquettish one, a demure one, and a tsundere who will end up developing the strongest relationship with the boy once fe comes out of feir prickly exterior. There's some basic teasing and lingerie-based fan service. The setting where a student studies for exams while boarding with girls reminded me of Love Hina. The plot twist the grandfather throws at the end also felt like a plot point I've encountered several times in some of these harem stories, and it's probably that twist that made it come across (to others) as series-worthy. Perhaps it's because I'm an atheist, but I found the implicit validation of superstitious beliefs to be a bit annoying. Especially the emotion-based reasons for Uryuu's stated lack of belief. By presenting feir intellectualistic arguments as ultimately stemming from emotional trauma, the story implies that rationality isn't a determining factor when it comes to whether someone believes in the supernatural or not. But rationality and reason-based judgment both can and should be a determining factor--while emotions, subjectivity, and experiential biases should be treated as things to avoid (in regards to such questions).

The art feels like it has potential, but is still a bit rough around the edges. There are some awkward curves on the girls and the faces and eyes can feel stiff, especially when any sort of emotion is being expressed or when characters are drawn not close up. The backgrounds use a lot of whites, shininess, and blurs. The food looked good.