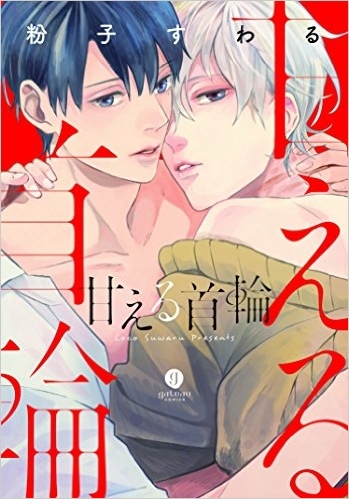 Rating for the second story [Yurete, Fureru Made]. The first story (and the name of the book) just ends abruptly and doesn't make sense hahaha

I felt like I understood what was going on in Story #1 until the ending--when Miyoshi reported to Fujiki that fe'd raised Rei to be feir ideal type--and then I was confused. Before then, I felt like this was a simple case of prostitution, of Miyoshi being hired to have sex with Rei. Rei was a famous model and had been getting in trouble because feir partners always left fem once they got fed up with fem strangling them during sex, so Fujiki felt it'd cause fewer tabloid problems to just hire a professional. But why is Miyoshi telling Fujiki fe's raised Rei well? Was fe hoping to have an unpaid relationship with Rei? And why does Fujiki seem to take this as bad news?

Story #2, called "Yurete Fureru Made," is a bit easier to understand. It involves a love triangle and finding a sense of comfort from a devoted partner.

CONTAINS SPOILERS
I thoroughly enjoyed everything about this mango except for one thing... it is two stories in one and the first one is left on a cliffhanger that is never explored later. It was very well done and would have been fine as a "fill in the blank for yourself" type ending, but when there were still three chapters left instead of feeling like an artistic decision it just felt disappointing. I kept waiting for the characters to appear again in the second story as a nod to what happened to their relationship but that never happened. It may as well just have been two totally separate mangos.

Story: both stories were set up and excecuted well other than the cliffhanger, and luckily the second story does have a satisfying ending. Unfortunately, kink was only in the first one but unlike the mistake so many other mangos make, it isn't explained as "the chacter is damaged and only likes the violence until he falls in love, then suddenly vanilla sex is all he wants because power-of-love bullshit." Instead it's more about coming to terms with wanting to hurt the people he cares about and dealing with the shame everyone tells him he should (and does) feel.

Art: the art was very well done, especially facial expressions and body language. I'm not a drawing style connoisseur so I probably wouldn't notice mistakes, but I have no complaints.

Characters: I found all of the characters well thought out and compelling, and all of the drama fit their personalities.

I honestly don't know why this mango is so low rated. The end of the first part wasn't fun but I would still recommend it to others if they like romantic dramas. To end it, I just want to emphasize that more mangos need to approach kink the way this one did. I've read way too many that in some way kink-shamed by the end.