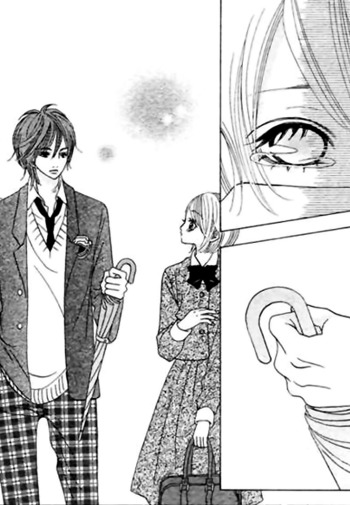 Can you understand true feelings through observation?

Lily Amemiya has the perfect boyfriend Yoh Tsuruta. Unfortunately, lots of other girls think so, too. How will poor Lily deal with all the attention her boyfriend gets!?

An invitation to a high school reunion leaves Kyosuke reminiscing about a peculiar female classmate who would read the same book over and over again - despite saying how boring it is. Even so, the more time Kyosuke spent chatting with this girl, the more he realized he was in love for the first time. One day, just like that, the girl was gone - leaving Kyosuke with a copy of the mysterious book and her words "You can become anything you want" echoing in his mind. Ironically, after becoming everything except what he wanted to be, an older Kyosuke recalls the fleeting kiss he shared with his first love - and with the reunion around the corner, finds himself eager to confront the lingering feeling that had remained dormant his heart for so long.

A guy's girlfriend likes to cosplay as a nurse for him.

I Love My Sister's Boyfriend

Judo-loving Mitsuka has been looking forward to finding her true love since starting high school. While walking through the park one afternoon, she encounters a cute boy napping on a bench. The next day a new coach arrives at Mitsuka's judo club. And who turns up? The napping cutie on the bench of course! His smile makes her heart race, and her name on his lips makes her face blush. But there is just one minor hangup....he's her sister Kari's boyfriend. What's a girl to do?