Am I Actually the Strongest? - Reviews 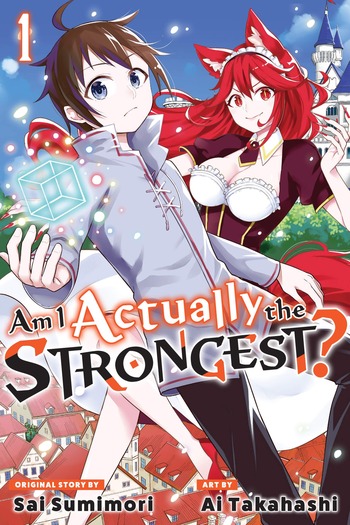 Hnn~~nnnn, it's sorta funny and cute in its presentation, and a lot of the problems I will be complaining about are likely intended to be comedic in their absurdity (and might not bother others for that reason).

First of all, what the fuck is a sound-emitting barrier? And why does Haruto act as though that's an obvious thing? And since when can barriers be used to make video recordings? Or be used to heal people? Or for teleportation? Or as alarms? Or to measure magical levels? Or whatever else fe fucking uses "barrier" magic for! It's stupid to create a premise (that fe uses barrier magic) only to then immediately disregard that premise. Also, it's stupid that fe hasn't realized that feir magic power is far greater than "2."

I do think the round table of "knights" was pretty funny, and that aspect might have made Charlotte's otherwise annoying personality worth it. And the way that fe just sorta goes along with it, especially in regards to them thinking that fe's the reincarnation of the demon king, is pretty cute as well (and reminds me a bit of Overlord). I can see some comedic potential in the monster village, and especially in the blushing golem. The premise of fem striving to be the best hikikomori that fe can be (and failing at that endeavor) is an adequate set-up, though one I've seen used quite a bit as a way to show off over-powered characters. Like, I can appreciate how fe looks up to Liza for being a shut-in for 300 years, but I think the inclusion of the clone hasn't been helpful toward feir plans of slovenly living and has just created annoying confusions.

The art is not very impressive. Several of the girls look quite similar. And some of the angles can look pretty awkward and stiff.

It’s really ridiculous.  No, I mean, it’s really ridiculous.  Try: newborn baby less than a day old being abandoned for having low magic power because their ‘magic reader’ couldn’t sense his level because it was so high- and him promptly figuring out how to float and attack and just generally be OP while swaddled in a blanket and not old enough to actually be able to see, and looking around when he shouldn’t be able to support his own neck.  He is a day old and defeating monsters, let that sink in.  And with that, understand that there’s 0 realism/logic, but that’s fine, because: isekai.

Except basically 0.2 seconds later he’s hungry and the first thing he says is ‘I need boobies’ and then there’s a naked oppai lady like??? it’s just generally garbage?  Would not recommend in any way, shape or form.