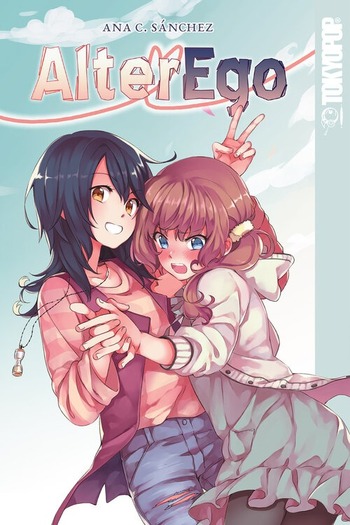 What if her prince charming was actually a princess?! Azami does not understand her friends' fascination with yuri and yaoi. As far as she's concerned, she's only attracted to boys, especially the handsome Gwyn, whom she's had eyes on since the beginning of the year. Intelligent, sporty, attractive and just a little older than Azami, Gwyn seems like the embodiment of the ideal boyfriend. But then, everything Azami believes comes crashing down when she finds out that Gwyn is actually... a girl!

Firstly and most prominently, both manga are by European creators. Secondly, both feature yuri-pairings involving teen girls, with a third girl added in to form somewhat of a love triangle, on top of one girl in the triangle acting antagonistically toward another girl while being in love with the third girl.

Dani's bright future as an elite tennis player comes to a sudden stop when, during a match, she has a heart attack. Her newly discovered condition affects not only her health, but also her relationship with her mother, as well as her career. Wanting to get away from everything, she leaves behind the big city ⁠— and all her problems ⁠— and goes with her cousin to a little coastal village. There she meets Blanca, a girl full of life and in love with astronomy. Blanca reminds Dani that life can be beautiful, and that she can shine again like stars do.

If I Could Reach You

Hopelessly in love, high schooler Uta must navigate living with her brother and Kaoru, her crush … and sister-in-law. Desperate to get over her unrequited feelings, Uta pulls away, but when the cracks in her brother's marriage begin to show, Kaoru begins to confide in her new teenage sister, which just makes matters worse!

Kei is interested in a woman at the gym. Imagine her surprise when she sees her in a lesbian bar!

At the end of school, Senri talks to her best friend, Chisaki, about how she's never able to spend time with her crush when he's always with his friend. Is there more than meets the eye here?

At the age of 14, her first lover was her sister's former best friend, Kyoko. It was a time where Noriko would meet Kyoko after school and be thrilled by the smell of her adult perfume and enchanting eyes, nothing like spending time with her boring classmates. But why did Kyoko and her sister stop being friends in the first place?

Ashita no Kimi ni Hanabata wo

About a girl who falls in love with her best friend's mother.