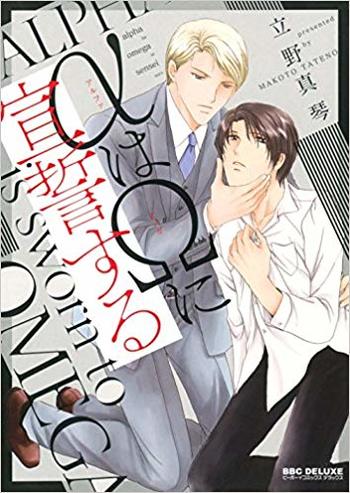 If you're looking for manga similar to Alpha wa Omega ni Sensei suru, you might like these titles.

Only Miyamoto's blood was infected with oak, and the only surviving oak was the only one in the world with antibodies. He was isolated by government research institutions and forced to make children with alpha, but Honda, who was elected that day, was unlike anyone ever, and in parentheses the moment they met! He asks for Honda in Alpha in his instinct and is consumed by lust. The relationship between the two people who are convinced this person is their fate but cannot be their turn.

100 years have passed since alphas and omegas went extinct… Now, they can only be read about in the pages of school textbooks. In a world full of betas, Yutaro Ayase, a rare omega, was born. In order to pay for the expensive suppressants, he stars in adult films. One day, he meets Ryo Inukai, a man he is undeniably and inexplicably attracted to. As things heat up between them, something strange happens! Is what they feel love, or just instinct...? A dramatic love story about the world's last alpha and omega!

College student and model, Sari, is really an Omega, but he hates it so much he's decided to live as a Beta. One day, his manager (and older sister) asks him to scout Taiga, another Beta at the same school for a pair modeling session. The two hit it off from their first meeting and celebrate the end of the shoot. Sari feels comfortable with Taiga, but under some intoxicating force, he goes into heat from Taiga's smell. Although he thought Taiga was a Beta, it turns out that, just like Sari, he's also been hiding his real sex and is actually an Alpha...!?

Boku no Omega yo Samenaide

Kindergarten teacher Ao Komatsu is an omega... of sorts. His physical characteristics appear to be 90% beta, with the remaining omega 10% only giving him low-grade fevers instead of full-blown heats. His twin brother Midori, a full-fledged omega, seems perfectly happy with his life and his overprotective mate, but Ao has no desire to be the property of some controlling alpha and is determined to live his life as a beta. But when he meets alpha Reiji Kunisada on the street and brings him home, his previously dormant omega traits begin to awaken, threatening to change his life forever. Now he's stuck living with an alpha he barely knows, who proudly declares himself to be Ao's "kept" man!

Liam Dawkins, a beta, has been living switching his jobs from time to time ever since his parents passed away. Nothing unusual happens in his life until he is hired to look after Oliver William, an omega with a broken bond. Liam soon finds out the reason he was hired for his new job is to sexually embrace Oliver, who has been in heat for a year, and who apparently hides a dark and sad past...

Two betas meet and begin dating each other, but they each suspect that the other is hiding a secret...

Even if we're both beta and even if we're not a fated pair, it'll be fine. Our relationship won't change, ever— Hibiki is a salaryman who has been living together with his high school sweetheart, Koushiro, for 10 years. When they had just met each other, they were convinced that they were a fated pair, but their gender tests revealed that they were both beta. Even though other gay couples can be blessed if they are a "fated pair," it vexes them they can't even hold hands in front of people. They tell themselves that if they love each other, all will be fine, but trivial things make them more anxious each day... But they hear about a misdiagnosis of the gender test one day...!?