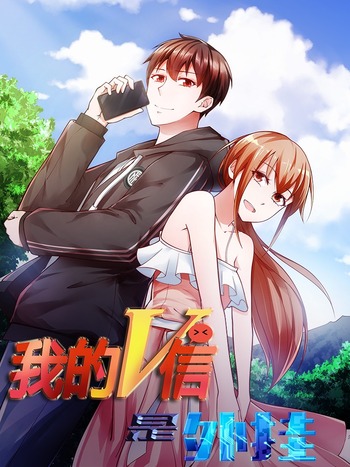 Similar to "My amazing We chat" and almost as bad.

The story is a mess, stuff happen randomly and there are many things that just make no sense and lots of intant gratification crap with no effort whatsoever, skills, phisical proficiency, knowledge, it just instantly happens, with him not needing to study, train, read, work, meditate or whatever.

MC is an idiot on many levels, for example, who in his right mind would tell a woman that want's to get rid of someone that you can forsee the future with his phone and prove it to her? is he looking to get sacked? And who the hell would just go ahead and drink a weird liquid he finds buried somewhere? "Oh it's from this mistery chat I know nothing about, let's drink it" yeah right.

Also, comedy is quite bad too, it's the "humor of the ridiculous" kind off comedy but not very well done, didn't even laugh once in 30 ch., definitely not my thing.

Last, the drawings are somewhat good, kinda simple with not many details but not bad.

Overall, not very interesting nor funny, I'd recommend anyone into this theme to read "Cultivation chatroom", it's pretty much the same thing but it's done with less bad humor, art is better and the MC and story take themselves more seriously.

This is such an amazing concept but thrown into the pit because of the author. Imagine having an app that gives you the news of the next day beforehand. You see how amazing this is and how you could develop a good plot. Something like past life regressor with him creating a company and slowly taking over the country or making his village prosper. But because its Chinese and I hate say it but they (most authors) have a weird way of doing their world building. It will either be something with plenty of canon fodder villains or a harem or a combination of both.

A small village rufian fights aganst a city mayor and a company,...

Authors mistake is making the mc too mercyful even thou the villain keeps on harassing him...

Making the mc a hero yet cant even put an end to a villain...   A really nice piece of shit....

In my opinion, even worse than 'my amazing wechat' with inconsistent art, a confusing intro, and nothing going for it, I wouldn't recommend it to absolutely anyone.